Ode to the Tardigrade: The Best Water Bear Merch 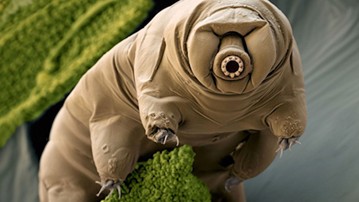 A whole curated collection of tardigrade clothing, gear, and random desktop accessories! You're welcome, microbiologists. The tiny water bear seems to be Rrawwrr!-ing onto the pop culture scene too, giving the equally humble and adorable sloth a run for his merchandising money.

Alright, let's battle it out: Water-Dwelling Micro-Animal Vs. Ultra-Slow Arboreal Mammal. Five Time Extinction Event Champion Vs. Docile & Large Enough to Give You a Hug. Who wins?

Or, maybe a better question, when is the tardigrade going to get its own Tardzilla shower curtain?

I hope you'll join me in my ode to the tardigrade, and enjoy looking through these pieces of water bear merch as much as I did.

I mean, I know the tardigrade is small enough to literally fall through the cracks of history, and therefore avert all major catastrophic events, but you still have to give the wee water bear credit for its longevity. And its persistence. The world tried to stop the tardigrade, but...the tardigrade persisted.

Someday the water bear (also nicknamed the moss piglet) could help us bring life to Mars. For now, though, it's just helping us bring life to our living room decor. Equisetum Shop's Tardigrade in Clothes is made of polyester stuffed linen, and wears a lovely flowered chemise. The shirt does an excellent job of drawing attention away from the extra bulk it's carrying in its back segments.

If looking at a cutey-patootie tardigrade isn't enough to make your tensions and frustrations disappear, maybe stretching and squishing the segments of one of the eight-legged wonders will do the trick.

Like the Live Tiny, Die Never Mug, the Tardigrade Five Time Extinction Champ T-Shirt celebrates the water bear's ability to outlive anything. In addition, the micro-beasts can sustain themselves in pretty much any environment. They have been found everywhere from alpine lakes to mud volcanoes to the deepest depths of the oceans.

A bonus to wearing a tardigrade T-Shirt over drinking from a tardigrade mug is that the shirt can easily go everywhere you do, so you can spread the water bear love, and maybe even do some fun 'splaining to people who haven't heard of the little chub before.

Earlier I mentioned the water bear encroaching the sloth's pop culture territory, but a Water Bear Don't Care T-Shirt indicates it might actually be a takeover of the honey badger. Has anyone hilariously narrated a tardigrade video for YouTube yet?

Summer is wedding season, right? Any microbiologist grooms out there? Science-y types still looking for a standout accent to their groomsmen's tuxes? Check it out. This isn't just a tardigrades bow tie. It's a tardigrade in space bow tie. You got stars and the anti-gravity effect in action on this piece of formalwear.

And I'll bet if we had the capacity to look, we'd find this depiction of water bears thriving somewhere besides earth isn't too far off.

Forget teddy bears, get your kid a snuggly tardi-bear. GIANTmicrobes produces a ton of takes on plush toys shaped like molecules, diseases, organs, and other typically unsavory bits of biological life. Their Water Bear Plush Toy measures about 6" x 4" x 3".

Happy Red Tuesday all you dudes and ladies out there prepping to give your significant other the ax tonight. Yes, it's true. The Tuesday before Valentine's Day is the busiest break-up day of the year. It's the last possible...

The Solo Cube Micro series has Father's Day gift for Dad written along every stroke of its microorganism replicas' laser-engraved glass. Each of these pieces of biological desktop art is a 3D portrait of a microorganism...

Barn owl pellets are the results of barn owls wolfing down their food without chewing it enough. Just like I do. But unlike me, the owls do not have cast iron stomachs that can digest the fur and bones of the little rodents...

Emily Stoneking of aKNITomy would like to welcome you to her "icky and cuddly world of knitted anatomy, where biology no longer smells like formaldehyde, but like your favorite sweater." The artist creates her series...

Ladies, show off your real beach bod this summer with an internal organs swimsuit. It's also a combo one-piece and rash guard, so even as you're revealing expansive areas of your anatomical insides, you'll be protecting...