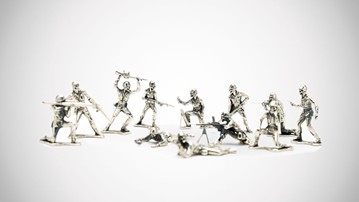 I'm not calling this compilation Unique Gifts for Military Men to dog the ladies. I respect and admire all the fine soldiers and veterans, male and female alike, who have poured their bodies, minds, and years of their lives into serving their country.

I'm singling out military men in this gift guide only because I don't think many military women would want any of this testosterone-tinged crap. But maybe I'm wrong. And if you know a lady officer or vet who's into knives with cyclone blades and mountain bikes she can jump out of an airplane with, by all means, buy them for her.

Note: Military gift prices are listed as they were at printing. Prices are subject to change.

Some call it the can that won WWII. Even though the Germans created the Wehrmacht-Einheitskanister, American and British forces quickly copied the design and used it for the efficient storage and safe transport of fuel across Europe during the war. They also renamed it a Jerry Can, "Jerry" being the slang term used for German soldiers.

Danish design firm One Copenhagen has repurposed and reconfigured actual Jerry Cans from military surplus stockhouses into the swell bar cabinets you see here. So now Jerry can be the can that won you the envy of all your friends.

These patriots heard the battle cry of Team America, and hollered back an even louder Fuck Yeah! From Paul Revere's Midnight Ride on a Tron Light Cycle to Abe Lincoln wielding an M16 and giddy-upping on a grizzly bear to George Washington annihilating zombies with the same vigor he used to axe the cherry tree, Jason Heuser's prints of America's badasses throwing down spectacles of badassery make me especially proud to have emerged from my mama's womb on United States soil.

Victorinox will sell just 1,200 pieces of its I.N.O.X. watch, a Carbon Limited Edition whose claim to Swiss Army fame is a case built from carbon "that's 50% lighter and five times more resistant than steel." In less dramatic terms, that equates to a watch whose net weight is 3.5 ounces. Woot, woot! Goodbye to the days of my watch weighin' me down and giving me a disproportionately large left forearm and bicep!

Louisville-based Sean Ramsey single-handedly makes and sells all of his military-themed BearArms Bullet Bracelets. Geared towards outdoorsmen, soldiers and their families, law enforcement officers, and anyone who wants to bear the remnant fruit of their arms, the bracelets come in 4 different styles and over 60 colors.

The Cyclone's obvious spotlight, its spiraling blade, is made of cast 2Cr13 stainless steel, and has 3 distinct cutting edges that extend 8" to a piercing point. The reinforced nylon handle has M48's trademark 30% fiberglass content to facilitate a secure grip. A solid stainless steel hand guard and skull crusher pommel are also standouts in this knife's notable design.

Overall Cyclone length is 13-1/2"; the knife comes with a specially designed TPR and nylon belt sheath.

Montague collaborated with DARPA to develop its Paratrooper, a high-speed, all-terrain tactical mountain bike that folds at the turn of a lever into a 3' x 3' pack in less than 30 seconds. Obviously, it was specked for military use. Specifically, the 24-speed aluminum-framed brute can be dropped from a plane, strapped to the side of an LAV, or tossed in a trunk when not in use, and slosh through water, over rubble, and down stairs as soon as the rider decides it's time to hit go.

A collection of your favorite fearless action figures rendered in solid sterling silver. Less their material substitution, Silver Army Men conform to the precise specs and details of their original Vietnam-era cohorts from Louis Marx & Co. They generally weigh between 0.75 and 1.25 ounces, and come in Classic, Doughboy, and Skull Face and versions. Silver Army Men says the latter "have had their heads lopped off and replaced with our custom Jack Skull." Full, 12-man squadrons of each variety are also available for purchase.

Battle-Rattles are the whiskey chillers that emerged from Coker's experiences serving and drinking Scotch as a proud American. His sets of scaled military-themed replicas are all made in the US, designed by disabled veterans, and built from recycled scrap steel.

I know there's some innuendo hidden somewhere inside this Just the Tip PVC patch from Morale Patch Armory. It's a play on...it's a saying dudes use to...awww, shoot! I'm firing blanks. I have it right there, but it won't penetrate.

Add a 3" x 2" slice of double entendre to your bag or patch panel with Morale Patch Armory's cleverly phallic bullet patch and "Just the Tip, I Promise" pledge. This version of the military-inspired embellishment is made of PVC, a variation on the embroidered style of one of the company's best-selling patches to date.

A penny for your thoughts, a quarter to call someone who cares, and an Air Force Coin for your untidy cuticles and hang nails. The 1-7/8" Air Force coin is minted with the official US Air Force emblem on the back and "a striking montage commemorating the awesome power and proud heritage of the world's most fearsome aviation force" on the front. (I think the EDC tool's seller is a USAF fan.)

The coin is made of a nickel alloy and its fold-out blades stainless steel. The knife arrives in a navy blue box ready for gift presentation to any Air Force vet or supporter.

Pop bottles like a G(I Joe) 6 with this little green man crawling with his rifle at the ready--the cap ready. The bottle opener is made of die-cast metal.

It's military-strength protection for your beer this summer! These tactical vest beer koozies come complete with MOLLE attachments for toothpicks, cigs, and lime wedges. They hold hot or cold beverages in a 12- or 16-ounce can or bottle.

I recommend watching the above video in its entirety. Not only because M4X Punisher demo damsel Kaila* is adorable, but also because she becomes even more adorable after she completes her successful attack on that coconut...