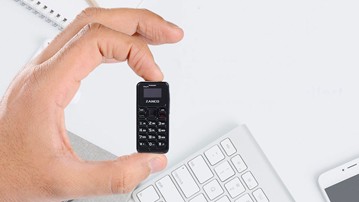 My little buddies aren't so different than my big buddies. Sure, sometimes pocket-sized gadgets and gear don't include all the same skills and bells as their full-sized counterparts, but both have one very important thing in common: they always try to have my back.

And what pocket-sized gadgets and gear must sacrifice in strength and power, they make up for in...smallness. They don't take up much space. They're light and portable. They stay hidden. Mini gadgets and downsized gear can go with you anywhere your pockets can. Here are my picks for some of the best of them.

Note: Pocket-sized merchandise prices are listed as they were at printing. Prices are subject to change.

At just a little over 1 cubic inch in size, Polaroid describes their CUBE+ 1440p action camera as both the World's Cutest and the World's Funnest. So obviously it's for serious selfie-takers only.

The latest version of Polaroid's micro camera includes built-in WiFi connectivity and a free app that lets you use your mobile device as a viewfinder and shutter remote. You can take snap shots from up to 30' away. Additional CUBE+ features include: standard camera settings, such as time delay, photo burst, time lapse, and slow motion; resolution and frame-rate selection; and viewing, editing, saving, printing, and sharing photos on social networks.

You can hone your archery skills from anywhere with Uncommon Carry's Bowman mini crossbow. Even better, load the small but mighty bow's barrel with your choice of match, Q-tip, or toothpick and take lighting the campfire, cleaning your ears, and picking your teeth to whole new, exciting, and interactive levels!

One more Bat Toy for my Bat Toy Box! This pocket-sized tube that adeptly screws into a grappling hook was originally produced by EDO Robotics in response to a desert warfare operator's request for a lightweight, reusable tool for snagging trip wires or command detonation wires on IEDs. Once the Pocket Grappling Hook made its debut, other military departments admired its utility, and ordered another production run. CountyComm now acquires and sells overstock hooks when they're available. And, tossers, latchers, grabbers, draggers, and straight up Dark Knights, they're available now.

SCiO is a pocket-sized molecular sensor devised to scan materials and physical objects, and then beam instant, relative information about them to the user's smartphone. In other words, it will allow us to analyze and view data about the makeup, caloric content, and health of most organic entities. Food. Plants. Medications. Boobies. Pretty cool.

If SCiO really works. While the device has made it beyond the sphere of Kickstarter, and SCiO creators, Consumer Physics, are selling both consumer and business versions directly through their website, I haven't seen many reviews of how well the sensor functions, and how accurate its results are.

Matador has condensed a comfy, water-repellent, puncture-resistant, 44" x 28" blanket into a 1.6-ounce square small enough to, oh yeah, slide in your pocket.

Is that an EDM show in your pocket or did I just lick a stamp I shouldn't have? Budding DJs, club kids, and general jams lovers alike, you can create big sounds using no more than your thumbs and one of Teenage Engineering's Pocket Operator Synthesizers. The palm-sized circuit boards come in models including PO-12 Rhythm Drum, PO-14 Sub Bass, and PO-16 Factory models, each mugging animated graphics on an LCD display, real synthesizer engines, sync, punch-in effects, a built-in speaker, an alarm clock, and, according to the people profiting from their sale, an "impossibly low price."

Have you ever been out somewhere, and seen something on the floor, or maybe stuck to the back of your friend Cornelius' coat, and thought, Ugh! What IS that? Welp, carry this little LED microscope around in your pocket, and from now on you'll be able to figure it out. Or at least get a 20x to 40x closer view to check it out.

Carson Optical's MM-24 MicroBrite is a cheap and easy to use tool for hobbyists, as well as a cheap and easy way to introduce your kids to the joys of science. And by that I mean they probably won't give two treated slides about the science, but will dig getting way up close and personal with their scabs, blood, dead bugs, and the glowing end of a firefly.

If they're holding your feet to the fire to light the kindling and make the logs crackle, hold your face to the fire--at a safe, 20" distance--to get it done. Epiphany Outdoor Gear's V3-Pocket Bellows is a modern take on an ancient fire-starting technique, a telescopic hand tool for adding oxygen to fledgling sparks without singing off your eyelashes.

The Pocket Bellows collapses to just 3-1/2" long and packs into an included water-resistant carrying case. During use it will compress and focus your breath directly into the core of the emerging fire, allowing it to grow quickly but without risk of soot / ash / spark inhalation. The stainless steel straw works on both wet and dry firewood.

No pipe? No papers? No hose, tube, or apple? If you've got the gnoB Socket water bottle cap you can take a deep sigh of relief...followed immediately by a deep breath in. The gnoB Socket is a sneaky little piece of EDC, a pocket or keychain tool whose purpose might best be described as "instant bongifier." Slip the gnoB into the mouth of any standard 12-ounce, 16-ounce, or 2-liter plastic bottle, and just like that you've got a disposal gravity / waterfall tobacco bong.

Yep, tobacco bong. That's my story, and I'm stickin' to it.

I don't have a NOCO Boost X Portable Jump Starter, but I do have a different portable jump starter - a much cheaper, albeit less powerful one, by the way - and I gotta say, it has saved my negligent ass at least, like...

I don't know when they named it the Morus Zero. Yeah, it's an ultra-fast portable clothes dryer, but it's not so ultra-fast it dries your clothes in zero minutes. It should be called the Morus Fifteen. Which is still...

Outlery's portable and collapsible cutlery sets remind me of a fun fact about myself: I can be anywhere, at any time, and suddenly start singing in my head the words, All I wanna do is eat some food to the tune of Sheryl...

The size of a water bottle, 5 seconds to set up, 300-pound weight capacity - sometimes with a camping chair, everything just Cliqs...

How did Lull World create a zero gravity hammock chair that's portable, ergonomic, and transformable to suit everything from a day working in the office to a day lounging in the park? They just threw together a 'lul'...

This briefcase is smokin' hot! The NOMAD grill & smoker packs a charcoal BBQ grill and smoker into a pretty decent lookin', and ultra-portable 20.5" x 13.5" x 9.5" case. Open the carrier up to expose 425 square inches...

The Pocket Piano isn't quite pocket-sized, but this modular, snap-together magnetic piano is definitely portable enough to take and set up anywhere you want to play a 7-octave, 2-pedaled professional piano. Your mama's...