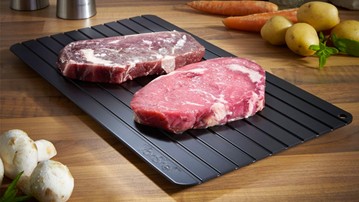 No heart-shaped dutch ovens here! These kitchen essentials are geared towards the man. More specifically, the man's man. You know, the man who likes to attack his steaks with seasoning, sear them just beyond bloody, and serve them up with a pile of mashed potatoes and the backdrop of a big ol' kitchen mess. Don't worry, he'll clean it up later. Yeah, OK, fine, later tonight. Yes, before the food dries onto the dishes in a cakey mess that will never come off in the dishwasher, and...

...on second thought, I'm just going to stay the hell out of the kitchen. For those braver than I, here are a few kitchen essentials for the man's man men amongst you.

Note: Kitchen essential prices are listed as they were at printing. Prices are subject to change.

Cast iron is heavy, burly, and the most manly of the kitchen gear out there. Lodge's line of cast iron skillets is also one of the most affordable, with pans ranging in size from 8" to 15". The listing here also includes a silicone hot handle, in case a man gets forgetful, hasty, or needs to react fast, and forgets the handle of the cast iron skillet is just as heat-conductive as the rest of the pan.

I swear I'm not a Lodge rep or product shiller, they just happen to make really good cast iron kitchen gear. And I am a shiller of cast iron kitchen gear. Le Creuset and Staub are good too, but most of their stuff is enameled, and decidedly less manly. Though if you our your dude needs a Dutch oven - uh, the cooking kind - I would spend the extra hundo or so on the Le Creuset over the Lodge.

Here though we have Lodge's cast iron reversible grill. The 2-burner slab flips between a 19-1/4" x 8-1/2" ridged grill and flat-top griddle cooking surface. It is hardy enough for use on both a stovetop and over a campfire. A slight slope on both sides of the cookware provides for fat drainage into a grease gutter.

As evidenced in the photo, you can cook all elements of a variety of delicious meals in this Master Pan divided skillet's segmented compartments. Like a bacon cheeseburger with a side of baked beans and...chicken kebabs? Mmmm, looks good. Or a pair of salmon fillets with wild rice and mixed vegetables. Mmmm...looks like I'd rather have Thai takeout.

The skillet is made of 100% die-cast aluminum with a heavy gauge bottom to distribute heat flow evenly. Its Bakelite handle is oven safe to 350 Degree F for 1 hour.

Standout blenders, like great kitchen knives and lasts-forever cookware, are going to cost you. Vitamix was the original commercial-quality, do-it-all blender for the home, and it's still damn good, but I prefer Blendtec's models for a few reasons.

Mainly, the canister is lighter, shorter, and wider, particularly at the mouth. Every time I'd try to scrape out my Vitamix I'd get smoothie or whatever all up my arm because the blending container was longer and narrower than Blendtec's. The short 'n' squat design also makes it easier to slide a Blendtec underneath cabinets for countertop storage.

This particular Blendtec model also has a "Wild Side+" blending jar, which the company says "revolutionized high-speed blending." It's basically a wider base with a narrow fifth side - a wild! side that's supposed to facilitate faster and smoothing blending.

Dish Soap + Cast Iron Cookware = Very Bad Cleaning Method. But evidently, Chainmail + Cast Iron Cookware = World's Best Pot and Pan Scrubber. The CM Scrubber looks like a cross between a potholder and the second ugliest shoes ever made (Crocs still sittin' heinously at #1), but its lifetime guarantee suggests its funky appearance only makes it more powerful and capable of de-crust-and-crapping cast iron skillets and pots without compromising their seasoning.

The 5-in-1 Griddler sits on kitchen countertops (or coffee tables, or firm dorm room mattresses) and, with its removable and reversible non-stick cooking plates, segues between contact grill, panini press, full grill, full griddle, and half grill/half griddle. A floating cover adjusts to food's thickness, so you'll be able to smash a grilled cheese and sizzle a fat lamb burger with equal bombness.

Dish Rum and Dish Tequila too, courtesy of Archer home products for men. Now I'm not sure if a soap that smells of barrel-aged, charcoal-filtered whiskey will inspire me to do the dishes more often, but it will probably inspire me to to do that tie-dye lava milk experiment catalyzed by dish soap on a regular basis.

These masculine vats of booze-themed dish soaps will clean the grease off your skillets, the crud off your plates, and maybe even that BBQ stain off your white T-shirt. Oh and Mama, the next time you clean my mouth out with soap, I'd like to request that you use Dish Whiskey to do it.

This rack is so nice it will give you solid wood. German home goods store Buchholz Berlin uses real branches, each obviously unique unto itself, to form and finish the Masserast series of kitchen knife racks. Each branch's length and shape will vary slightly, but you will be able to choose between tree parts large enough to hold 3, 4, and 5 knives. Or any ferromagnetic implement you want to mount, as Buchholz embeds super-strong magnets into their racks for holding power.

In addition to appealing to my own gaming and stealth warrior sensibilities, maybe this Kitchen Ninja's cut-the-BS scowl will keep my cat's grubby paws off the countertops. Just try to F with Kitchen Ninja's mise en place, Zanzibar!

The Ninja Knife Block comes criss-crossed and in full-frontal presentation with 3 knives: a utility knife; a bread knife; and a chef's knife. It's an honorable kitchen gift for anyone into ninjas, martial arts, or cluttering up their future wife's cooking space with geeky man things.

Chifen Cheng's cast iron and wood kitchen knife has won multiple design awards from official contests and organizations, plus one enthusiastic and gentlemanly bow from me. I wish there were a video of the knife's walnut blade slicing vegetables, and its cast iron handle grinding spices like Cheng and collaborator Maison Milan say it can, because if this thing truly cuts like a knife, then I'm ready to make it feel so right in my own hand.

I want a big hunk of meat, and I want it now. What? Frozen?! Thaw overnight in the fridge? Thaw in a bowl of water for a few hours? Thaw in the microwave and let it get all...microwaved? How about, instead of any of that, I just set it on this superfast defrosting tray, go drink a beer, and come back to a steak that's ready for the grill?

Kitchen Art's Ham Dogger takes a quarter pound of ground beef and shapes it into a meat tube reminiscent of America's second favorite pork product, proving once again that anyone who argues in favor of leaving well enough alone should shut the F up.

Take all of the same sick toppings you pile on top of your burgers and shove it inside the meat. A simple, two-piece apparatus, the Stuff-a-Burger press can make gigantic 3/4-pound or still-pretty-big 1/2-pound hamburgers filled with anything from caramelized onions and bleu cheese, to bacon and cheddar, to peanut butter and your mom. Zing!

Know when else you can eat pizza in the morning, pizza in the evening, pizza at supper time? When pizza's on an IRONATE dish of intense heat conduction that needs just 3 minutes to cook it into a disc of pure crispy-chewy-cheesy-crust love. On your stovetop. Even the glass flattop electric and induction kinds. The IRONATE is a carbon steel piece of cookware that says it will get as hot as commercial pizza ovens in less than 10 minutes, and then cook your homemade pizza from scratch in another 3. All from a single burner on your kitchen range.

Aaarrrggghhh! I don't have anything to say about a collapsible colander and cutting board combo! I'm only running it at all because my mama swears it is a handy thing to have for a New Year's Eve get together, or any...

Joseph Joseph's Titan Trash Can & Compactor is one of the coolest low-tech gadgets I've seen all year. Maybe even on the all-time list, up there with the Naomi Spring Nutcracker. Presuming it works as shown in the video...

This Waterproof Cork Apron is handmade in Portugal and sold as an eco-friendly gift idea for your favorite chef or pitmaster. The sustainably-source cork comprising the apron makes for both a vegan alternative to leather...

The Maiullari Cooking Box: A Kitchen Solution for...Nomads? The Giovanni Pesce design is clever, I guess, but it seems like even the smallest and most efficient of apartments and homes are equipped with a kitchen. And...

Once I'd covered fish aquarium bathroom sinks and aquaponic end tables I figured the whole fish-in-your-furniture schtick had run its course. What other piece of home decor could incorporate aquatic life without seeming...