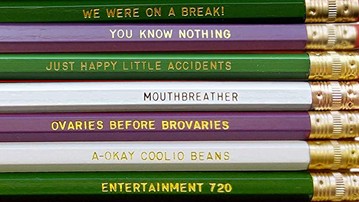 Engraved in gold foil, the Stranger Things pencils use mostly dark and somber colors - both show- and early-80s-appropriate - to carry their messages. Recognizable quotes and mentions from the Netflix hit include "The Upside Down," "Friends don't lie," "Mornings are for coffee and contemplation," "Four puffs of the Farrah Fawcett spray," "Mouthbreather," "011," and "I need my paddles!"

The colors of nature shine bright as Bob Ross' smile, and full as his afro in Define Design 11's Happy Little Trees Pencil Set. Brown, green, deep teal, white, dark blue, copper, and gray convey inspirational messages such as, "Talent is just a pursued interest," "If you don't like it, change it," and "Let's get crazy."

"We were on a break!" I know a few dudes who could use a whole set of pencils (Friencils!) to hand out with just that Friends quote engraved on them. And a few more who might like to stockpile some Joey Tribbiani "How you doin'?" sketchers.

Define Design 11 Gold Foil Pencils are all made in the USA. Not Westeros. Not Essos. So while they carry no special powers, rest assured they carry no curses either. They're just boring old pencils that will occasionally bring a smile to your face, but mostly cause you great frustration when you find they aren't sharp enough, and you have nothing on hand, no power whatsoever, to make them act like the pencils you thought they'd be.

I never watched The Gilmore Girls, and I'm not just saying that to save face. I have, however, seen two episodes of This Is Us, and figure they're probably about the same thing, so suffice it to say, I don't like The Gilmore Girls. Those who do, however, might enjoy a pencil set with lines such as "Where you lead, I will follow," "Luke's Diner," and "I need coffee in an IV" on them.

Hand-carved by master woodworker, Ron Swanson! At least that's what I'd always say when I let someone borrow one of my Parks and Rec pencils.

The Parks and Rec 7 comes labeled "Pencils and Recreation," and features choice soundbites such as "Treat yo'self," "Happy Galentine's Day," and "Ovaries before brovaries."

Despite the bleak, dystopian vibe emanating from Squid Game's actual story and content, the costumes you can build from these Squid Game masks and either head-to-toe black, or a pink jumpsuit, make Netflix's Korean survival...

What Should I Watch? Streaming Service Decider Dice

At the top of the list of first world problems: stress and anxiety over what, out of thousands and thousands of options across Netflix, Hulu, Prime Video, HBO, Apple TV*, Disney+, and dozens and dozens of other streaming...

The Office Stapler in Jell-O Soap

March 24, 2005. A simpler time, when we were younger, life was still normal, business was as usual, and staplers were being congealed inside Jell-O molds in The Office. The doors of Dunder Mifflin opened on our TV sets...