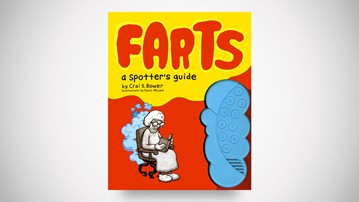 Apparently there are so many different kinds of farts on our planet that we need not just one Spotter's Guide to identifying them (with sound effects!) but five! Five guides to fart-spotting!

Fart enthusiasts and white elephant gift seekers, get ready to shart your pants!

Muchas danke to Mitch T. for the Dude Product Tip.

This is the original guide to fart identification. And since the publishers followed it up with four more specialized books on the different types of farts you might encounter throughout your life, you can bet Farts: A Spotter's Guide is a real gas.

For fart-spotting beginners, this is the place to build your foundation. The book outlines the habitat, range, voice, and "field marks" of 10 common toots, with an attached battery-powered fart machine to help you imprint their associated sounds. Scratch 'n' sniff pages not included.

Farts Around the World: A Spotter's Guide

Now we home in on cultural differences in the breaking of wind. Farts Around the World: A Spotter's Guide is the second installment in the in the series, exploring flatulence on a global scale.

Pressing questions this guide answers: What is proper English etiquette for a tea room emission? Can a Swiss fart be so loud that it generates an echo? If a meditating Buddhist passes gas, does it exist?

In addition to educational, I feel like Farts Around the World: A Spotter's Guide could also be incredibly racist. But since I haven't seen the book in person, or smelled very many farts from around the world, I guess I'll reserve judgment.

Once again, no scratch ' n' sniff supplements are included.

Farts in the Wild: A Spotter's Guide

RRRAAAWWWRRR! Even in the wild, it often comes out of the other end. And nope, still no scratch 'n' sniff. What a boar.

Tyrannosaurus 'bout to Rex you with a steamy cloud of digested triceratops guts. Now, Jurassic Farts: A Spotter's Guide says it "not only includes stats on the funniest dinosaur farts but also the sound effects that go with them." To which I say, "But...but...how?!" How did anyone collect statistics on dinosaur farts? Are these just educational guesses based on their closing living relatives, or are they flat(ulence)-out faking this stuff?

I'm going with the latter.

Seems like they could have faked some scratch 'n' sniff too though while they were at it.

Scratch 'n' sniff? Anyone, anyone? Grampa?

Nothing says, I love you to the fiercest farters in your life like a Deluxe Dutch Oven Kit. Hahaha, you might think, this is such a clever gag gift! Everyone's gonna have a good laugh at The Dude when he opens it, and...