Dude's Must See Products for July 2021 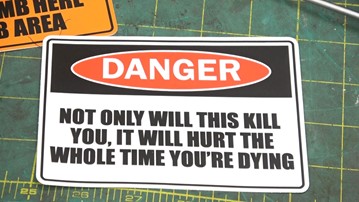 Dude's must see products for July 2021 serve up the sex in Lorals Latex Panties and Crown Nipple Rings, the violence in the TOYOGE Knuckle Duster and the Shelby Destroyer Foam Disc Blaster, and the aftermath cleanup in microMend Emergency Wound Closures. And for those of you dudes not interested in participating in any of the above, grab a Session Goods One Hitter, a Cocoon Sleep Sack, and a front row seat, and just chillax as you take in the mayhem below.

Who better to protect your car's start / stop button from Thanos, dust, and kids' wandering fingers than an Avenger? These covers, made in the likenesses of Iron Man, Spider-Man, and Black Panther, will also look kinda cool on the ignition button, making a unique and fun superhero gift for all the Marvel fans out there.

The Shelby destroyer is a foam disc blaster its makers say is built to fire 6 discs per second, at up to 160 FPS. Its magazine can hold 120 discs, and the ammo is ready to discharge in your choice of semi- or fully automatic blasts. If you thought foam dart guns were totally tubular, get ready for the totally disc-ular Shelby Destroyer.

I might even call it the Round Hot Dogs of Nerf Guns.

Hints: 1) It eliminates something some people love, and other people hate; 2) Don't use it if you want to be skinny; 3) It seems like a legit product, though some might say it smells a little fishy down the line.

microMend Emergency Wound Closures give new meaning to the term "pinch one off." Marketed as a quick, safe, and way less expensive alternative to heading to the ER for stitches, microMend closures can seal lacerations of up to 1" in length each, or lined up to seal longer cuts and gashes. Teamwork, baby!

Finally! A wearable dental dam! Lorals Latex Panties, despite being able to stop right there - latex panties? I'm in! Wrap some in every style up as a gift for my wife - aren't just sexy underwear to look at, they're functional underwear to don during sexy time. Lorals deems their brand of ultra-thin disposable latex panties, "A new way to say yes to oral," because they enable ladies to enjoy them some oral sex without fully exposing their pleasure parts.

Dead Startup Toys from internet collective MSCHF are here to give a few shits 'n' giggles to the entrepreneurial in-crowd. Serve as "Remember that trainwreck?" desk toys and gifts for the geeks and techies in your life. Aaaand stir up bad memories, possibly buried rage, for all the people who invested in or helped crowdfund the Coolest Cooler, Jibo social robot, Theranos miniLab, Juicero juicer, and One Laptop Per Child (OLPC) laptop.

You've heard of a ghillie suit? Well, Cocoon Sleep Sacks are just like...nah, they're nothing like that, but "ghillie suit for glampers" is definitely the first thing I thought of when I saw faux Clint Eastwood up there chillaxin' in one of Albrea Products' luxe and cozy cocoon blankets.

Made of ultrasoft fabric with elastic stitching throughout, Cocoon Sleep Sacks are more blanket than sleeping bag, and definitely more for lounging it than roughing it. Think Netflix & Chill on the couch, a chilly night on the patio, or even sensory stimulation and comfort for people with anxiety or on the autism spectrum.

Fidget toy meets self defense weapon in the TOYOGE Knuckle Duster. Even when you're wearing it, with its bright white-and-black carbon plastic composition, and funky shape covered in textures and imprinted accents, the tool doesn't look quite like the jaw basher its serrated and steepled design has cut it into. In fact, I think the biggest hint the TOYOGE Knuckle Duster is indeed a knuckle duster is the knocked-out frowny face emoji punched into its grip.

Behold, the incredible disappearing...staircase? The Klapster fold-flat staircase, while more design and engineering ingenuity than pure magic, is truly a remarkable sight to see, and an even more practical installation for your loft, attic space, or the entire upper floor of your efficiency condo or tiny home.

The Session Goods One Hitter isn't your grandpa's pipe. But your refined and elegant grandma would probably love it. Another release from designer-level smoking companion brand Session Goods, the One Hitter is a piece whose simple glass design is as fetching as it is functional.

The One Hitter is pocket-sized for discreet on-the-go tokes, be that during a quick break from a long shift or a bad date, amidst the wilderness at the peak of a hike, or amidst the wildness of this year's family reunion.

These funny warning stickers from Bumblefack of Etsy shop AvEwerkz are like my favorite bumper sticker, "WARNING: This Vehicle Makes Frequent Stops at Your Mom's House," but for an industrial workplace setting, or your home workshop. Or maybe even stuck on the computer, desk toys, desk chair, and weight bench in your WFH office.

Hints: 1) In case you were wondering how many things can look like sex toys while having an entirely different, non-sexual use, the answer is: a lot. This is one of them; 2) I bet The Boring Company would approve of it; 3) Using it might make you exclaim, "Hot diggity dog!"

What's old is new again. The Playdate handheld game system officially debuted this year, with preorders beginning July 29, 2021. Unlike Nintendo's own Switch (itself coming out with some shiny new upgrades) the Playdate seems all about paying tribute to the OG Game Boy. Its case, albeit blinding yellow rather than chill gray tones, incorporates the familiar A + B buttons and d-pad, and living inside the Playdate's wee screen? A 400 x 240 1-bit display in full, glorious...black-and-whiteness. With no backlighting.

Honestly, I have no idea what kinds of advice and nuggets of wisdom you're going to find between the pages of Bang! Hopefully the kind that makes those pages stick together as soon as you're done with them.

Dude's Must See Products for August 2022

Ahhh, August. The month leading up to Halloween. No wonder so many of Dude's must see products were...wait a minute. Halloween is in October, right? And October doesn't come after August...right? Geez. I ran at least...

Dude's Must See Products for April 2022

April is, of course, home to the great April holidays of Easter, April Fool's Day, and 4/20. But with the exception of that last one, for which I crafted a special Smokin' Hot Gifts for Weed Enthusiasts round-up, none...