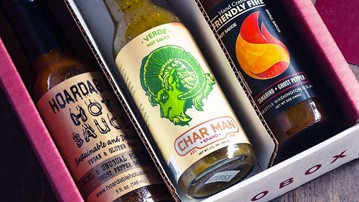 First We Feast's Hot Ones brings me so much joy. Who'd have thought feeding celebrities 10 hot-sauce-slathered chicken wings of increasing spice levels, up to Scoville units that make them swear and sweat and snot all over themselves and guzzle milk like a baby to ease the pain, could be such first-rate entertainment? I'm not mocking the show, or its participants, either. I love Hot Ones, and I think Sean Evans & Co.'s interviews are some of the best out there. Way better than TV's canned talk shows and 60 Minutes.

Plus, Hot Ones has introduced me to some mighty tasty hot sauces. Some mighty bad, mighty taste-bud-annihilating hot sauces too. And it's definitely redefined my opinion of some of its celebrity guests (Padma Lakshmi, Charlize Theron, I bow down to you. You are the Hot Ones who rule Hot Ones.)

So my friends Cornelius, Victor, Maurice, and I were thinking it would make for some choice live entertainment to conduct our own Hot Ones Hot Sauce Challenge. Two of us as interviewers, two as hosts, all four as ingesters of the heat.

You'll have to round up your own Scoville victims, and chicken wings, to participate, but if you're wondering which hot sauces to use in victimizing / dousing them, I've got you covered. Want to do a DIY hot sauce challenge? Here are the hot sauces that will take your mouth (and throat, stomach, and GI tract) from tingly to touched by the Ninth Circle of Hell.

Fuego Box is my top choice for one stop hot shopping. The company's entire business revolves around hunting down craft and small batch hot sauces and selling them, optionally, by the bottle, or, more appropriate for a hot sauce challenge, by the gift box.

You can also subscribe to a Fuego Box hot sauce club and get 1 to 3 new bottles every month for your desired period of time.

For easy advice on how to line up your hot sauces once you've got them, Fuego Box includes 1- to 4-chili ratings on all of their individual hot sauces and hot sauce subscription services an gift boxes.

Cholula might even be a step below entry level in the hot sauce challenge. It's like the NCAA play-in game. I've never heard anyone mention the sauce's Scoville units, but I'd guess they're, like, 10? 12?

But, on flavor alone, I love this stuff. I can go through half a bottle on 2 tacos, so if you want to ease into the heat with some plain old yum, start here.

Also, as mentioned on the Bob Saget Hot Ones interview, many people think the lady on the cover of the Cholula bottle is Bob Saget.

Mmmmm, smoke and tomatoes. This is a chunky hot sauce that will give your tongue a mild zap, but it's the mildest in Hellfire's gourmet hot sauce line. From here you can advance to Hellfire Gourmet Green, and then Hellfire Fiery Fool.

Now we're getting into heat, but just medium heat, and not without accompanying flavor. Garlic, obviously, and it's noticeable here. So even if your mouth escapes feeling the fire of Love Potion's habanero peppers, your breath likely won't avoid the aromatic fire of everyone's favorite allium.

...with a Tropical Twist! What can I say, I have a sweet tooth and I love me some Dirty Dick's. Habanero and pineapple are a match made in hot sauce heaven (er, hell?)

On a pure spice level comparison, Dirty Dick's Hot Pepper Sauce is probably on par with Love Potion, but its sweetness kind of convinces your brain your tongue has encountered a lesser level of heat. Outside a DIY hot sauce challenge, I'd dump this stuff all over some BBQ pork and Hawaiian pizza.

Yep, I'd say Fool's Paradise puts me right about there. Inside a fool's paradise. The Merfs hot sauce issue is on the upper end of medium heat. Maybe into high heat, if you have more virginal taste buds than I do. After taking a little swig I didn't quite break a sweat, but the cold room I'm in did get warm enough that I could take off my hoodie.

Fool's Paradise is a thin sauce with little bits of mango and bell pepper to sweeten up its ghost pepper benchmark.

When I do my own DIY hot sauce challenge, I want at least one Indian-influenced hot sauce, because when it comes to spicy food Indian is the King of the Slow Burn.

You know, the kind of heat that kicks in only after you've already taken 4 giant bites of what you thought was plain old delicious lamb curry. "Excuse me," it says, "but I'm afraid what you've actually eaten is lamb curry that's been crapped out of the ass of my Hindu fire god.

Makes for a fun twist, am I right?

Da Bomb Beyond Insanity is usually the third to last hot sauce Hot Ones feeds their guests, so from a Scoville standpoint, not the hottest rated. But from partakers' responses, it is the worst. The one that makes them choke and cry and sometimes quit the challenge and accept a spot on the Wall of Shame. Pure heat, no flavor seems to be the taste consensus. Charlize Theron called Da Bomb an "asshole."

It's a must-have for any hot sauce challenge lineup.

A First We Feast creation (hence the $20 price tag - sheesh!) The Last Dab is always the final sauce in the Hot Ones challenge. It's so named because Sean Evans usually wuss-shames his guests into putting an extra little spurt of The Last Dab on their already-laced chicken wing before eating it by telling them, "It's tradition around here."

Responses indicate The Last Dab is indeed hot, but either it's not as bad as Da Bomb, or everyone's insides are so completely numb by then that they can't really register any level of spice anymore.

One F**kin' Drop at a Time Hot Sauce

In this case, I think that inserting an eyedropper as a serving utensil for One F**kin' Drop at a Time Hot Sauce isn't more than just a kitschy packaging ploy. Reviews of the habanero- and scotch bonnet-infused mouth...