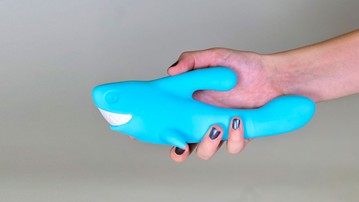 None of the animals that made my cute but cantankerous animal gift list are dogs, but I think we can still talk in terms of bark versus bite when discussing just how ill-tempered and aggressive these selections are.

Some definitely have barks worse than their bites. In fact, the "bite" of the Shark Emojibator is more like a tickle. A reeaalll niiice tickle that will have the ladies coming (back) for more.

Others, though, are biters. Skin biters. Tongue biters. Eye biters. There's even a sweet-looking unicorn that's an ear biter.

These Feisty Pets are the perfect way to teach your kids about the true nature of animals. All cuddly puppy and squishy bear and magical unicorn at first sight, but get too close and...Rrrrrawwwrrr! Back the F off, son, or I'm gonna gnaw your face off! My only criticism is that Feisty Pets didn't also include a stuffed woman in their educational animal toy line.

Add some extra spice to your knuckle sandwich. On a typical day, The Kitty Keychain simply tricks out the keys to your Honda Civic. But on the day you leave the Civic at home, and get jumped walking home from the bar, Kitty's eyes transform into knuckle holsters, and her ears a pair of daggers guaranteed to inflict maximal gouging, gashing, and puncturing upon impact.

From forth the cinematic masterpiece that was that Ted comes the the plush masterpiece that is this Ted. A 24" cuddle monkey with the angelic face of a Care Bear and the profane mouth of a Goodfella, Ted is recommended for adults ages 18 and over who get a charge out of hearing a stuffed animal drop the F bomb and rip people a new one.

At the push of a button, the 1:1 scale movie replica spits out big-screen phrases such as, "You ever hear a Boston girl have an orgasm? 'Oh yeah! Oh yeah! Harder! Harder! Oh, God, that was so good! Now I'm gonna stuff my fuckin' face with Pepperidge Farm.'"

And if you're into sequels, there's also a profane Ted 2 talking plush.

Before you argue that there's no cute, only cantankerous when it comes to T-Rex, I'd like to remind you of the T-Rex Hates Pushups and the T-Rex Hates High Fives shirts, which make the poor guy with underdeveloped arms seem almost precious.

Then you have something like this Jurassic World Bite 'n Fight Tyrannosaurus Rex to snap you back to reality. He's big, he's bad, he's got dual-button activation for head lunges and tail strikes. The kids - and anyone who messes around with the toys on your desktop - will love him.

Two words: Yee ikes. Kat Su has poured the best (and by that I mean strangest and most perverse) of her Tumblr crappytaxidermy.com into a coffee table book sure to make your coffee table the least popular gathering place in town. Crap Taxidermy spotlights the worst of an already curious industry always teetering on the edge of tacky.

I also like this book because you can shorten its name to Crap Tax, which pretty much describes every dollar I give to my local government.

Philip Blackman's Undead Ted creations are each completely unique in appearance, though, like Axl Rose, all share an appetite for destruction. He makes all of the zombified ursine plushes by hand, and it takes him about 7 to 10 days to create. a batch of 12 to 18 Undead Teds.

At which point he uploads them for sale on his website, and they sell out almost immediately. Get on his mail list for a heads up about when batches will go live so you can grab one for a Halloween prop / surprise gift left unwrapped on your girlfriend's pillow before everyone else does.

With a bite 900 times hotter than a jalapeno, and at least that much hotter than Lil's Wayne, Jon, Kim, and Bow Wow, Flamethrower Candy Co. believes its Lil' Nitro is the World's Hottest Gummy Bear. And therefore ripe for a dare-you-to-eat-it spicy thing challenge, a la Paqui's Carolina Reaper Madness Chip and Fuego Box's Cocoa Loco chocolate.

Turn Shark Week into Shark Every Night of the Year with Emojibator's The Shark. A gift for your girlfriend right up there (er, no pun intended) with the original Eggplant Emojibator, but with a little something for the givers who themselves dig gifts with a bite.

It would have been enough just to turn a stuffed unicorn keychain into a personal safety alarm. That these guys plugged the removable silencer into the magical beast's back side is almost priceless.

Here's hoping you don't get stuck cleaning up a big pile of rainbow shit every time you scare off an attacker.

The Animal Chair collection constitutes a diverse range of species, from mammals to reptiles, and even insects. Each creation retains the animal's natural vitality whilst being totally biologically accurate in their appearance...

I see your flying squirrel, Flying Dutchman, and flying [email protected]*k, and raise you a flying blue whale! No, make that a life-size flying blue whale. Wind master Peter Lynn's superbly massive kite measures in at over 60 feet...