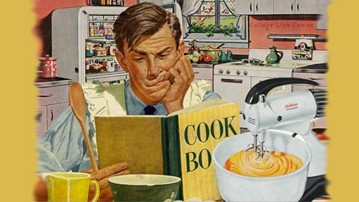 Cookbooks for men include cookbooks for men who like to cook, and those for men who despise it. Cookbooks filled with recipes for giant, indulgent, borderline disgusting dishes, and cookbooks that reel it in and take more of a male health and clean eating angle. Most contain stories, anecdotes, and reassurances that you're not the worst cook on earth (maybe not even in America) and a surprising number contain as much foul language in their recipes and narratives as you or the dude you gift them to will unleash while cooking with them.

Note: Cookbook prices are listed as they were at printing. Prices are subject to change.

A Super Upsetting Cookbook About Sandwiches

As a representative of the gender, I can attest that men do love them some sammiches. And don't worry, A Super Upsetting Cookbook About Sandwiches isn't so named because it reveals that sammiches, like, cause cancer or make you sterile. The book is kind of like PornBurger meets neurotic New York chef.

Tyler Kord, the neurotic New York chef, owns and operates NYC's No. 7 restaurant and No. 7 Sub shops. In A Super Upsetting Cookbook About Sandwiches, Kord shares recipes and ruminations, both unique to the chef's psyche and, some would say, genius. His sandwiches look delicious. His mind looks...like it never stops racing at Formula 1 speeds. Vrrroooom! Full eats ahead.

A classic for any man who enjoys good food and colorful language. What the F*@# Should I Make for Dinner?: The Answers to Life's Everyday Question (in 50 F*@#ing Recipes) contains meal suggestions and preparation instructions for life's most trying times of hunger. Every f*@#ing page contains a Choose-your-own-adventure-type option for cooking the food listed, or moving on for reasons such as not f*@#ing like that, not f*@#ing eating meat, or, if you're not a loser, not being a f*@#ing vegetarian.

How to Cook Everything Fast

How to Cook Everything author Mark Bittman follows up his first hit with a cookbook men might appreciate even more: How to Cook Everything Fast. The cookbook condenses 2,000 main dishes and accompaniments that could normally take hours to make into recipes that promote efficient preparation techniques, creative (and sometimes unorthodox) use of kitchen equipment, and what Bittman calls "naturally fast cooking." Eat homemade wonton soup in around 30 minutes. Chicken parm now requires no dredging or frying. And fruit crisp does its crisping on the stovetop.

When I see the title F*ck, That's Delicious, all I can think of are the words, "Mm-hmm! This is a tasty burger!" I wonder if Action Bronson uses Jules Winnfield, or the Jules Winnfield talking action figure, as inspiration for his food musings and explorations like I do.

Whatever Bronson uses, you'll see them all put to paper in the forthcoming F*ck, That's Delicious: An Annotated Guide to Eating Well. It's a book the former chef and current rapper (the Reverse Snoop Dogg, if you will) wrote not as some syrupy autobio or tough-guy memoir, but as a "devotional." An ode to the power of food "replete with orgiastic recipes, world travel, siren songs, and weed."

Even better, he includes the recipes to make them so we can all Weird Science our own mouthwatering Lisa Burgers.

Targeted specifically towards men between the ages of 18 and 35 who got no skills, and no skilled one to cook for them. Man Meets Stove provides tips, recipes, and comic relief to men who have only ever learned how to use a microwave.

Moreover, authors Jim Madden and Thomas Jacques say the cookbook "will help men cultivate skills, cooking and otherwise, that will assist them in their fledgling attempts to date women." Tutorials include: Oils and other lubricants; Bacon, the other spice; Drunk Broccoli; and Wake Me Up Before you Go Go Brownies (Caffeinated Brownies).

Another health-centric installment for men who care to cook clean. Serena Wolf is a chef and food blogger who's compiled 125 "outrageously delicious yet deceptively healthy recipes" especially for dudes.

All I have to say is Wookiee Cookies better just be a treat Wookiees love and not a treat Wookiees are...you know...baked into. No man needs Chewie ginger snaps describing anything but the texture of his favorite after-work snack.

Wookiee Cookies and Other Galactic Snacks merges Star Wars with the culinary world...or at least the world of indulgence and delicious junk food...with recipes such as Boba Fett-ucine, Han-Burgers, Death Star Popcorn Balls, and Yoda Soda.

Mac 'n' Cheese Nachos, Loaded Avocado Fries, dude. It's time to bro-down. The Culinary Bro-Down Cookbook, despite incorporating a word most men do not want to be associated with, has a respectable goal, one most of us can appreciate: expanding our world of late-night munchie food beyond instant ramen and frozen tater tots.

This compilation from Lauren Wilson is part cookbook, part culinary field guide. It combines over 80 recipes with gastronomic survival tips and dozens of diagrams detailing how to scavenger, forage, and improvise your way to nourishment during the bloodiest and most viral of times.

Ramen Goulash. Black Bean Ramen. Onion Tortilla Ramen Soup. The Jailhouse Hold Burrito. Slash's J-Walking Ramen (yes, that Slash). And Orange Porkies, chili Ramen with white rice, half a bag of pork skins, and orange-flavored punch. Pretty much anything the prisoners can get at their commissaries, and we can get at the gas station convenience store.

Thug Kitchen, in the piped icing vein of What the F*@# Should I Make for Dinner, has parlayed a recipe blog and the gratuitous use of profanity into a cookbook. And although I'm pretty sure noting Thug Kitchen on the Web is "beloved by Gwyneth Paltrow" is less of a top Thug Kitchen in print selling point than it is a great way to ensure no one will buy your fucking book ever, the real-world, no-frills food the TK authors use to cook up healthy, bomb-ass dishes like Roasted Beer and Lime Cauliflower Tacos still make Thug Kitchen: Eat Like You Give a F*ck worth a second look.

Over 100 recipes, from bitch-ass soup to motherfucking nuts, fill the full-color pages of Thug Kitchen. The cookbook also contains supplemental information on cooking techniques, shopping on a budget, and hopefully slaying fuckball onions without crying like a pussy.

All the thugliness, half the effort. Thug Kitchen: Eat Like You Give a F*ck follows up its bestselling debut with this faster, simpler, and more f*cking thugged out motherf*cker of a cookbook, Thug Kitchen 101: Fast as F*ck. From comfort food to one pot meals, these b*tches guarantee all their recipes will be healthier, tastier, cheaper, and quicker to hit up your stomach than delivery.

Thug Kitchen recipes are always at least 5 out of 10 funny, and their accompanying photographs at least 5 out of 10 something I would eat. The only real problem with the Thug lifestyle is that it's plant based. Like, the whole book is vegetarian. That's pretty bad news if you're on a vegetable-free diet.

Mmmm, I could sure go for some lamb shank tonight. According to my fiancee, a little redemption wouldn't hurt me either. Fitting, then, that in my search for dinner and ways to un-piss off my lady I stumbled across The Lambshank Redemption Cookbook. New in 2017 year from Lachlan Hayman, the tongue-in-(beef)-cheek recipe collection pays tribute to 50 blockbuster movies.

The full title is Guy Gourmet: Great Chefs' Best Meals for a Lean & Healthy Body so, yeah, probably a departure from most of the other entries on this list. But if you're a man who prefers lean over obscene when it comes to dinner, the editors of Men's Health magazine have 150 recipes for eating well and staying fit.

Honestly, The Christmas Movie Cookbook doesn't appear to have many recipes I'll actually want to make - or even request my mama make for me. Old Fashioned Meatloaf from A Christmas Story? Chicken, Broccoli, and Cheddar...

Making dinner. Anymore it's either taxing, convoluted, frustrating, or comes straight from a box/can/Ramen pouch. Why, when you walk into the kitchen and lament, What the F*@# should I make for dinner?, can't there be...

When I first saw Heroes' Feast: The Official D&D Cookbook, I kind of laughed and muttered to myself, Here's your gift for the geeks this year, dudes. But then I remembered I just saw Ronda Rousey on Hot Ones, and Sean...