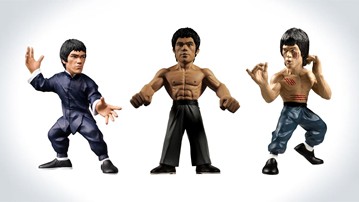 Fanatiks brings us these officially licensed Bruce Lee collectible action figure. Each figure in the series stands 6 inches tall and has four points of articulation. The action figures come in four different iconic Bruce Lee poses spanning three of Bruce's movies, The Game of Death, The Way of the Dragon and Enter the Dragon.

The Game of Death was Bruce's final attempt at filmmaking. This film would ultimately not be completed as Bruce died during the making of it. This first in the Fanatiks series of action figures finds the martial-arts legend in his yellow and black tracksuit with yellow Ontisuka Tiger shoes and nunchaku.

Fun fact: Kareem Abdul-Jabbar appears in The Game of Death as "Mantis, the 5th Floor Guardian".

This Scratches edition features Bruce from a fight scene in Enter the Dragon. Released in 1973, Bruce plays a martial arts expert seeking revenge on a narcotics dealer whose gang was responsible for the death of his sister. Lee enters a kung fu competition in an attempt to fight his way to the dealer's headquarters with the help of some friends.

If you listen closely to the Flex edition of Bruce Lee's flex pose from Way of the Dragon, you can almost hear his muscles. Released in 1972, Way of the Dragon paired Bruce with fellow martial arts expert Chuck Norris in his screen debut for an epic fight scene.

Another classic Bruce pose from Enter the Dragon

If everybody wants to have fun tonight, everybody should Wing Chun tonight. Don't know how to Wing Chun? I can help you learn! Haha, sike. I can hardly punch the buttons on my building's elevator without missing a couple...

Here are some Fighting Ninja birthday candles to help you hold your resolution to kick ass and take names this 8th...28th...38th year of your life. I'd ask them to start by sending some Ninjutsu moves the way of anyone...

I am not a weekend warrior. More a weekend coucher. But, if I were, this seems like the neck knife that I would want on my person. The Flagrant Beard HAVOC stems from an essential necessity of law enforcement and military...