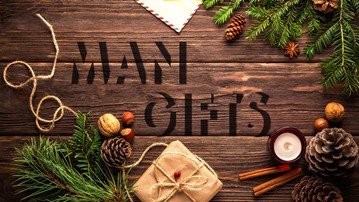 A gift for the man you love. Swag for the bros you owe. A big fat merry present for the dad, the boss, the son, and all the rest of the dudes on your holiday gift list. You'll find all your gifts for men here.

Or you'll at least find some of your gifts for men here.

A few of them.

And for everyone else: socks and 5 Guys gift cards!

Holiday gifts for men prices are listed as they were at printing. Prices are subject to change.

Logosol's Smart Splitter shares the same log- and kindling-splitting goals of the Kindling Cracker and Vipukirves Leveraxe: speed and safety. But from a design and usage standpoint, it's different than both.

The Swedish patented Smart Splitter is a 2-poled tool with a pair of wedge axes and a striking weight on its workaholic CEO side, and a stabilizing leg on its supportive significant other that holds the family together side. In tandem, Logosol says the two make breaking down trees into logs and kindling simple and safe for anyone, and much easier on your back, arms, and shoulders.

It might look familiar but the GameShell is a portable game console with characteristics unlike any other. The open source portable gaming system is a modular console embedded with a GNU/LINUX OS. Programmers can use it to create or modify pre-existing games with Preset C, Python, Lua, JS, and LISP, and all gamers can use GameShell to play retro games from systems including Atari, GB, GBA, Nintendo, MAME, MD, and PS1.

Hot diggity-dog, with a Coca-Cola on the side. Though you'll have to buy the sodie separately, the Coca-Cola Hot Dog Steamer & Bun Warmer more than makes up for what it lacks in Coke reservoirs with a giant lower tray that cooks up to 24 hot dogs (or brats and other tubular sausages) and a top rack for steaming 12 of the doughy buns you'll slide them between.

Sometimes a little chub can come in handy. Chubby Buttons is an easy-touch Bluetooth music remote. Wearable, stickable, clickable, and water-resistant, the oversized buttons let you control your audio without digging around for your phone and fumbling with its touchscreen, or battling with touch-sensitive earbuds when you're wearing winter gloves. When you're in the middle of a motorcycle or mountain bike ride. When you're in the shower.

Chubby Buttons say they're compatible with all music apps, headphones, and Bluetooth speakers, and don't require any additional apps to pair and use.

101 Things to Do with a Huge Willy knows you've seen - maybe even taken - dick pics. But have you seen - or taken - the kind of dick pics illustrated in its collection of "101 inspiring ideas for more useful things you can do with your knob"? My favorite: big dick group selfie stick! Weee! Can't wait to give it a try. Hope no one minds looking like an ant in the photos.

A showstopper for the kitchen, this Thai Forged Steel Moon Knife is an actual handcrafted, artisanal piece from Thailand. Its carbon steel blade is almost half as wide as it is long at the base, but arcs in to its point, giving the knife both a cleaver, and its eponymous Moon look.

The cover is both airtight and waterproof, and in addition to adding some quick protection after an ominous forecast, can be used as a long-term storage alternative to, say, your mama's garage after she gets her fancy new Buick convertible and kicks your ass (wheels) to the curb (uncovered parking strip).

The Sparkr Wick is designed for use with all fire-craving products and tools, and in all conditions. Its long neck facilitates the former, providing access to deep-dish candles, gas burners, pilot lights, and even fireworks (proper care still required with the Roman Candles, et. al. if you don't want to ring in the New Year with a blown-off face.) Paired with an angled head, you'll also be able to use the Wick to lock onto its namesake for lighting "with Jedi-like accuracy," according to Power Practical.

Egg-->Facehugger-->Chestburster-->Xenomorph. Even at under a foot tall the Aliens Four Stages of Fear Beer Stein lives up to its name in its representation of Xenomorph evolution. I've never felt less inclined to guzzle myself guttered at an Oktoberfest. And I think I'll just stick with water at the New Year's Eve party.

Fully motorized with a 50-dart drum. Talk about things that make you go hmmm BOOM! Nerf's forthcoming Elite Titan CS-50 toy blaster is ready to unleash a hailstorm of foam in battle.

Presuming you also remember to get your gift recipient a pack of D batteries at the drugstore to power it.

Lars Mytting's Norwegian Wood: Chopping, Stacking, and Drying Wood the Scandinavian Way has sold over 200,000 copies in Norway and Sweden. The book is both a rustic's and manly man's guide to using your 2 hands to generate heat for warmth and cooking, and a genuine exploration of what Norwegian Wood publishers call "man's age-old predilection for stacking wood and passion for open fires."

And I thought this poster on peeing with morning wood was the best wood how-to I'd ever seen.

Commercial airlines can suck it, and even private jets and Santa's sleigh have nothing on the sweet ride these Millennium Falcon blueprints will help me build for my holiday travels this year. Over the river and through the woods? Nah. We're getting to Grandma's house by way of Endor and Taris.

the Patent Poster Prints of Han Solo's beloved starship come in 18" x 24" and 24" x 36" sizes. All are professionally printed on glossy coated paper with your choice of Chalkboard, Parchment, or Blue Draft backgrounds. Maker Paper Blast also offers a framing option for an extra charge.

Pelican's Emergency Lighting Station mounts to a wall in your home or office, with a classic Pelican hard case serving as a protective shell for the glow-in-dark flashlight inside. The torch has low and high beam modes, and a continuous runtime of 8 hours on high mode, and 202 hours on low. There is also a flashing mode. The flashlight is IPX8 water-resistant.

WRAPTIE up a rugged and omni-functional gift any dude will dig this holiday season with WRAPTIE Tie Down Straps Adventure Packs. Adventure Packs bundle different sizes of the versatile straps and their accompanying accessories into sets designed specifically for your favorite activities and endeavors. Choose from a cyclist-centric Rider bundle, a Downtown bundle for moving and hauling, an Expedition bundle for road trippers and travelers both on and off the grid, and a Six Pack all-purpose bundle to keep on hand for anytime you need to strap in and tie down for the day.

The Woodman's Pal has been in service - US Army service - since 1941, and was a standard issue from WWII through Desert Storm. In official terms, it's a land management multi-tool, but I imagine when you look at the Woodman's Pal you probably see the same things I do: machete! Axe! Sickle hook! Good times in the woods!

The Woodman's Pal here is a 2.0 version of the classic, and indeed it combines all of the above, plus shoveling capabilities, into a single "management tool" you can use to "manage" land-clearing projects, as well as "manage" efforts to survive outdoors should the need arise. With the Woodman's Pal 2.0 you should be well-equipped to chop, cut, trim, prune, split, blaze, brush, clear, build...slash, slice, whack, and gut.

Briefcase full of batteries?! That's almost as good as cash or cocaine totally legal CBD oil! And we're not talking 140 batteries tossed in all willy-nilly to tumble into entropy like the ones you currently toss in a shoebox or junk drawer; this battery storage box is an organizational dream, with individually cut holes to cradle all of your favorite power cells snug as a bug in a rug.

Dude's 2022 Holiday Gift Guides mimic the days of Christmas this year - you know, there are 12 of them, dudes. Most are your standard fare of Gifts for Men, Gifts for Women, Gifts for Dad, Gifts for Mom, Stocking Stuffers...

The Best Luxury Gifts for Men

My sense is that most people looking at the best luxury gifts for men are not made of money. They're the people hoping to be on the receiving end of the people made of money. Myself included - how do you think I got the...