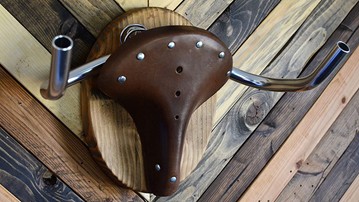 You might hunt elk and deer in the woods to taxidermy into prized wall art, but in Portland they make theirs out of saddles and handlebars hunted down in the hipster Goodwills. Home furnishings designer The Iron Roots hand-crafts this series of Bicycle Taxidermy bike wall display racks from a shop in - no surprise here - Portland, OR.

The functional, funky pieces of art are made from Oregon fir wood, a leather bicycle seat, and bull-style road handlebars. The animal head resemblance of the results is loose, but unmistakable, and would probably go over real well in the home of any two-wheeled hunter who regularly stalks and slays century rides and the daily commute.

Modeled after the head of a Texas longhorn, this piece of Bicycle Taxidermy sees its glossy silver handlebars extending from the sides of a brown leather head with 6 rivets arcing along the top. It secures to the wall via its oval wood backing and a pair of 3-1/2" screws, which The Iron Roots says "bring unquestionable stability no matter what wall material you hang it on."

With a face a little wider and coloring a little deeper than the Longhorn, The Iron Roots shapes this bike rack after the American buffalo. It incorporates a real bike seat and handlebars, and can support any standard sized bicycle less space-consuming and more aesthetically pleasing storage.

Ahhh. Susie Swanson from down the street had a white bicycle seat like this one when I was a kid. And silver handlebars with white grips and blue and purple tassels dangling from their ends. And prematurely large boobies. Ahhh.

Developed in Norway, Dropracks are a super swell take on the roof rack that allow you to load your gear at waist height, so you don't drop as you rack up your kayak / skis / mountain bike, and spend the day nursing a...

Ding, ding! Bicycle coming through! Well...partway through anyway. These retro bicycle sculptures make for some charming 3D wall art, especially with their front baskets ready to enhance the effect when filled with flowers...

Even though Speedcraft AIR nostril-opening sunglasses are designed for cyclists, after 2 full years of pinching off my nostrils with face masks and their bendy metal nose bars, I am really feeling a piece of eyewear designed...