A Guide to Good Times in the Polar Vortex 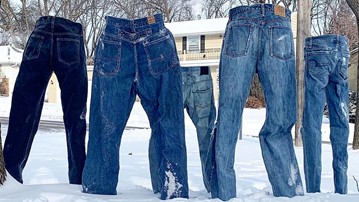 From the Frozen Pants Challenge to catching up on some quality Netflix & Chill time, this guide to good times in the polar vortex is a (possibly feeble) attempt to make those of us suffering through it look at the bright side of sub-freezing temperatures, piles of snow, and walls of ice rising from Lake Michigan.

Actually, that last one doesn't need a spun bright side - it looks pretty damn impressive all on its own.

Note: Polar vortex product prices are listed as they were at printing. Prices are subject to change.

Freeze your pants off...and then leave them in your front yard as bodiless statues commemorating the Polar Vortex of 2019. The Frozen Pants Challenge is a new online pastime for those in the midst of the wintriest of winter weather right now. And I gotta say, I think it's a real good one. Funny, harmless, and a terrific way to capture for posterity just how cold it's been this month.

If you don't have enough pants to spare for front yard decor, you can get some cheap Wrangler jeans from Amazon to set the scene.

How to Build an Igloo: And Other Snow Shelters

An outdoor shelter able to withstand the weight of a polar bear! And at least 4 golden doodles. If you decide to take Norbert E. Yankielun's advice on how to build an igloo, be sure to bundle up first, because it's not just about molding and stacking ice bricks.

You've got to figure out if your snow is simple "snowman snow" or the good stuff, suitable for a slab shelter. And if it's not, maybe you'd rather erect a bivy bag shelter or a snow block wall.

In How to Build an Igloo Yankielun uses whimsy and line drawings to teach you how to build a whole bunch of different useful snow structures.

Concussion, anyone? The Wham-O Snow Crossbowr blasts a sizable wad of hard-packed snow up to 60 feet to strike the included target (yeah, like that's ever making it out of the box) or wallop your deserving victim. Schoolyard bully, good luck trying to bear children in the future.

Sled Legs say they're here to "make winter fun again!" And oh boy could residents of the polar vortex ever use some fun this winter.

Sled Legs are a pair of snow sled outer surfaces with cushioned, rounded interiors that cradle and latch over the lower halves of your legs. They're designed for riders 5'0" / 13 years and up, and sledders weighing up to 250 pounds. In use they should feel as smooth and simple as sledding, but with the speed and directional control you'd have with skis. Bonus: you'll never get chucked off your Sled Legs, or have to drag them back up the hill behind you at the end of a run.

The Track N Go wheel-driven track system installs in less than 15 minutes on any vehicle that has wheel adapters and bumper stoppers. It is most practically used by members of commercial fleets that must barrel through snow and along treacherous roads in the names of capitalism and rescuing people who are idiots. However, as indicated by a Tracked-out Jeep in the photos above, the Track N Go can also serve private drivers who have the money and inclination to unleash a new flavor of snowmobile on the mountain this winter.

If you're going to venture into the vortex for some polar fun, you'll obviously need to gear up for the cold with the right shoes, clothing, and other winter wear. In the unique 'n' nifty accessories department you'll fine the Embr Wave, a body temperature regulating bracelet developed at MIT.

The Embr Wave doesn't act so much as a whole-body thermostat as it does a temperature controller for your brain. As anyone who has rubbed ice cubes on their wrists might know, if you cool or warm a single spot on the body, it can change how you feel everywhere else, even if your core temperature stays the same. In other words, your brain feels the relief on your wrist, and focuses on that warm (or cool) fuzzy feeling rather than the discomfort that may still be in your face, back, or butt cheeks.

The Embr Wave wearable has a button controller that increases or decreases the temperature of its own rectangular module, giving you a "shot" of warmth or chill. Embr Wave creators compare the sensation to "an ice cube on your skin in the summer or the warmth of your hands by the fireplace in the winter."

Snowfeet look like a lovechild born of a forbidden affair between a pair of skis and a pair of crampons. From the latter Snowfeet got their compact, strap-on design; buckle the foot-shaped shoes over your own pair of winter boots, and you're ready to glide. The gliding - and skating and racing and tearing downhill - traits Snowfeet inherited from skiing. But while their thrill of use is similar, some might consider Snowfeet even better than skis, given they come with a fraction of the slope, heft, and schlepping requirements.

Big Blanket Co. says their 10' x 10' Big Blanket is the Biggest! Blanket! Ever! At 4 times the size of the average throw blanket (50" x 60") the Big Blanket indeed looks large enough to cover and keep the whole fam damily warm when every last one of them would freeze their ears and rears off outside.

A big ol' blanket also seems a most inviting accessory for burrito-ing yourself and your special lady up on the couch when the weather makes it just about impossible to do anything else.

Fit right in to the polar vortex with Griz Coat's Polar Bear Edition. The part coat-part costume serves the dual purpose of winter warmer and people charmer, with its bear head hood that's as work-week practical as it is weekend lady bait.

Really, the best times to be had in the 2019 Polar Vortex are outside of it, and inside your house. With a Netflix subscription, a queue of days' worth of movies and shows to binge watch, and a lady or dude who's just as into hunkering down for some Netflix & Chill as you are.

I previously put together a list of the best accompaniments to a night (or, in this case, a week or two) of Netflix & Chill. Check it out.

Goofy? Yes. Overkill? Maybe. But let's also review all the ways in which this full face trapper hat - with goggles! - is exactly the piece of headwear you need right now. Or at least need to get as a gift for your girlfriend...

These ABUSA Lambswool Insoles for shoes, boots, and slippers provide no arch support, but Baaaaaa! Who needs arch support this winter when your feet are luxuriating in thick and cozy natural fleece?...