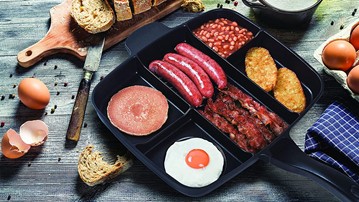 Note: All 18 breakfast gifts are priced as they were at printing on December 8, 2021. Pricing, and availability, are subject to change.

There are a lot of cheap plastic trays that cook eggs in the microwave out there. Lekue tries to distinguish itself first by using platinum silicone for its omelette mold. They say the material is completely food-safe, easily bent and stored without losing shape, and won't leave any leftover residues during cooking that may alter the finished product's flavor.

Also, you can use the omelette maker to micro-steam chopped vegetables before adding the eggs and cheese, so it's a generally faster and cleaner way to Gordon Ramsay up some omelettes.

This mug has been specially crafted with a "plate" set into its rim so you can use your morning cup of coffee or tea to also hold and warm your morning doughnut. The only problem is that I heard your morning doughnut is really, really bad for you. The worst. Like, heart disease with a hole in it. So I'm glad to see mug creator Best Morning Ever also suggests some alternative, healthier options for steam cradle warming. Muffins. Danishes. Mmmm, chocolate chip cookies.

I think I have juuust enough room for a DASH Mini Toaster Oven on my desk at work. It's got a perfect 9" footprint on the outside so it's great for small spaces, and I'll bet it's bigger on the inside for cooking, like, 16" pizzas and whole turkeys and...no? Smaller on the inside? A piece of toast, a bagel, maybe a lone chocolate chip cookie? Huh. DASH Mini Breakfast Toaster Oven it is then.

Pancake + Waffle = PanWaffle. If you're being unimaginative. I can think of so many better names for this hybrid pan ready to griddle me 2 delicious breakfast staples in one. Like, Have Your Pancake and Waffle It Down Too. Or Flapjack Up Your Waffle. Or Pwaffke.

Hate to waste all that bacon grease after cooking up a slab of thick-cut applewood smoked strips. That's good stuff. It really beefs (porks?) up my fried eggs. And my chicken & waffles smoothies. But when there's too much sediment, too many burnt bits floating around to make it desirable for reuse, I could use a container like this one - sturdy, heat-proof, and topped with a fine mesh strainer to make my bacon grease pure again.

Squee! your hearts out for the Egguins, ladies and kiddos...and dudes who are being honest. Peleg Design's egg holder uses the arms of penguins to cradle your delicate shells as their own bellies - so precious! - and then lower them gently into...hard boiling water that will surely cook the penguins along with the eggs. Huh. From precious to disturbing in 5 seconds or less.

Boiling penguins aside, the Egguins holder is an egg cooker, storer, and server that exhibits Peleg's trademark ingenuity in design. It really is equal parts functional and adorable, right up there with the OTOTO's Nessie family of kitchen utensils, and Spaghetti Monster Colander.

However, for those of you who dig the stovetop, and are actually interested in what goes into the food you're eating, the MasterPan could be a good buy. As evidenced in the photo, you can cook all elements of a delicious breakfast - plus a variety of other meals - in the skillet's segmented compartments.

All I need is this ring, and I'll be a delectable man plate of chicken & waffles. As for the Waffle Belt Buckle itself, I don't think anyone can better describe its appeal than creator, Jon Wye: "For people who wish they could pour syrup on their crotch all day long but are prevented by social convention." Ahh, like I said, bring on the chicken.

Are you coming up short in your search to sizzle sausages to supreme succulence sans the swiney mess? Aren't we all, dude, aren't we all. Or rather, we were until the pork masters at Johnsonville cooked up the Sizzling Sausage Grill Plus. An upgrade to their basic Sizzling Sausage Grill, the Plus comes with 3 different styles of griddle plates, so with little more than the push of a button and a Sooooo-ey! you can dig into Johnsonville brats, breakfast sausage links, and shaped sausage patties without greasing up your kitchen.

Eggs. They're almost as fragile as cats and guinea pigs. Better suit them up for the battle then. The battle they're still going to lose with my stomach. Sorry little hard-boiled ovo-knights. You're just no match for my brutishly strong man hands. I'm afraid I'm even going to steal your spoon sword for use in hacking open and devouring you.

This gift from the heavens cooks a Belgian waffle and an omelet simultaneously. Concurrently. At the same fucking time. Do I even need to say triple-decker waffle omelet sandwich? Do I need to say anything else at all?

Paper towels now too precious to waste on your bacon grease? Bacon Sponge that pork fat up with this reusable "unpaper towel" from Green City Living. Sewn up nice with quilted polyester microfiber and organic cotton, the Bacon Sponge absorbs grease post-cooking, and then cleans up like new in the sink and laundry.

A dude, L. Tremain, designed these Original Butter Bell Crocks after the French butter crocks, which somehow use water and bone china to keep butter fresh and at the perfect spreading consistency for up to 30 days. No fridge, no spoilage, no odors, and no destroying your toast with hard hunks of butter.

Nostalgia Electrics brings on all the nostalgia with a retro combo toaster oven, coffee maker, and flat-top griddle. The toaster holds up to 4 slices of bread, a 7" frozen pizza, or sandwiches ready for heating and cheese-melting. The coffee pot has a 4-cup capacity, and the griddle up top a large, non-stick surface with a glass lid. The setup also includes a 30-minute timer with automatic shutoff.

Sip-A-Bowl, I slurp what you're pouring here. You've got my favorite take on the reusable straw yet. The cereal bowl with a built-in straw is made for drinking down the last drop of my Froot-Loops-infused-milk, with the bonus of facilitating obnoxious sucking sounds at the end that will irritate my wife. The only thing more fun to do at breakfast is call in sick to work.

It's not that the CrunchCup thinks cereal and milk don't mix well, the purveyor of portable breakfast just thinks they don't mix well on-the-go. Via a pair of nested, isolated cups with their own openings, the CrunchCup lets your bowls of cereal go anywhere you do, keeping the milk and grains sealed and separated until you're ready to eat. At which point you'll tip the CrunchCup to your lips and feel your cereal mix as you much, so the last sip-bite tastes as fresh and crunchy as the first.

I'm no connoisousvideseur, but I do enjoy me some bacon egg bites from Starbucks, and what do they cost these days? $8? $24? Some amount that would indicate the Dash Deluxe Egg Bite Maker will pay for itself after just a few breakfasts. Snacks. Session-driven munchie sessions.

The Dash Deluxe makes 4 egg bites per lid drop, and cooks them in about 10 minutes.

Are you ready for a half-pound, 930-calorie Fruit Loop? No, not half a pound and 930 calories worth of Froot Loops*, a single Fruit Loop weighing 6.7 ounces and packing 930 cals into the happy...but maybe turning sad...

Milk for Santa's cookies? Lame. This year I'm leaving out a can of Maple Stream instead, and letting 7 fluid ounces of sprayable maple syrup help him wash down the peanut butter blossoms, Corn Flake wreaths, and gingerbread...

I found some new cereals for your Sunday brunch. They're called Special Kanga Kush and Lucky Choo Choo Charms. You can eat them from this glass breakfast bowl...

Willy Wonka is a pseudonym. His real name is Geraint Krumpe. And in these health-conscious, no-sugar, no-carb, caveman-diet times, he's traded in the chocolate factory for endless crates of protein powerhouses, and one...

5 minutes to a breakfast sandwich. No drive-thru on earth can beat that...mainly because of the whole leaving the house and driving to the drive-thru portion of the equation. Otherwise I guess most of them could. If there...

Cereal Motel has a slightly different take on "adult" cereal than Fiber One and unfrosted Mini Wheats do. It's a take I like a whole, whole lot more than whole grains and improved bowel movements. Cereal Motel makes "deliciously...

So far my favorite part about the NEGG boiled egg peeler is 18 seconds into the demo video. That's when a patient-looking grandma hand gets frustrated with her old-fashioned egg-peeling efforts and squashes the whole...