16 Gifts for Kids the Adults Will End Up Playing With 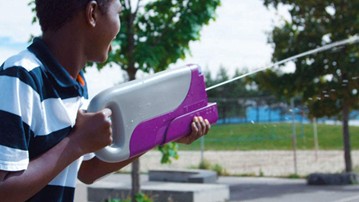 Adults can't keep their fingers of out the gifts for kids pie no matter what the toy or gadget is - I mean, someone has to fight with the packaging and conquer the assembly - but when I say I've found 16 gifts for kids the adults will end up playing with, I mean 16 gifts for kids the adults will end up taking away from the kids to play with. Sorry, squirt, Daddy and Uncle Joe are in the middle of a very important HEXBUG Battle Championship that will determine who gets the last of the 21-year aged Jamaican rum in his egg nog. Check back in an hour.

Note: All 16 gifts for kids are priced as they were at printing on November 21, 2021. Pricing, and availability, are subject to change.

I don't know Magnus, but based on the looks of his Incog Water Gun - sleek, svelte, and stealthy - I'd be on his team for a water fight. Honestly, with a name like Magnus, I'd feel pretty comfortable being on his team for a bar fight or, like, a fight to save Earth from hostile aliens too.

But let's stick with the water fight for now. In a nod to MI5, the Incog Water Gun reimagines your standard squirt gun or Super Soaker as a more stylish, and easily hidden, blaster of H2prOjectiles. Team Magnus says the Incog also feels more ergonomic to hold and use, and is more in line with "modern kids' gadgetry."

PAC-MAN slides into the Tamagotchi universe in a few charming ways. For example, at feeding time you'll nourish your Tama with PAC-MAN's favorite sustenance, cherries. And while trying to be a good parent who doesn't let their kiddo get axed, you'll have to call in PAC-MAN to help fight off ghost attacks. If your Tamagotchi reaches adulthood, you'll be rewarded with a surprise character, one of 7 adults built into the game.

If you've never been hit in the face with a basketball, the ceilingSWISH indoor mini basketball hoop is the perfect opportunity to get in some good practice. At least the "rock" that comes with this ceiling-mounted hoop and net looks soft enough that you won't break your nose every time hand-eye coordination fails you on the rebound. Or...yuk, yuk, yuk...shoot your eye out.

Arts & crafts meets dodgeball! Chameleon Colors Color Balls are little sacks o' fun - the kind that won't get you pregnant, and won't land you in the fetal position if handled the wrong way - filled with chalk powders dyed all the glorious hues of the neon rainbow. Use them as projectiles in the ultimate backyard or party game, toss them around at shows and festivals, or give the clown next to you a run for his money when you use color balls to juggle.

HEXBUG's DIY robotic tech toys for kids are going to battle, and getting in on the Battle. The HEXBUG BattleBots Arena Pro release pits a pair of fighting robots against one another in the spirit of the long-running reality show BattleBots.

Makers 8 and up can customize their HEXBUG BattleBots in more than 100 different configurations. Both the assembly and arena fighting elements of the game help build STEM awareness and hand-eye coordination. BattleBots are remote controlled, with batteries included.

See, The Nightmare Before Christmas Operation game is a great example of why I want to help eradicate this COVID pandemic. With ICUs full, healthcare workers stretched thin and rundown, and getting into a hospital becoming about as hard as getting into a Trader Joe's, I can just see myself falling down the steps or getting attacked by this squirrel in my mama's backyard that has it out for me, and ending up just like Oogie Boogie in the Operation scene. Splayed out on a table, cut open up and down, and hovered over by a gaggle of 7-year-olds trying to "extract the hurt" because there aren't any doctors or nurses left to help.

I don't really understand how this PanGogh batter art pancake griddle works, but as long as there are delicious pancakes that look like delicious ice cream cones at the end of it, I'll leave that to the kids to figure out.

The electric griddle comes with 2 nonstick templates and 4 batter bottles for creating colorful and delectable ice cream cone and lion flapjacks. You can buy additional templates separately, or freehand your edible artwork with the combination of fine-tipped and standard-tipped batter bottles.

Sold by Japanese brand JUYIKUAI, the Millennium Falcon Tensegrity Building Kit erects into a 6" x 4" x 3" desktop-perfect model depicting a LEGO-style smugglers' freighter suspended, as if by magic, over its base. The magic, of course, is the magic science, whose tensegrity principle allows components under tension to interact with those under compression in a way that creates this illusion of a floating Millennium Falcon.

SPLATZ are burstable bubbles filled with soap, made for kids to squeeze, smack, and, in true onomatopoeic form, SPLATZ! their way to clean hands. The soap bubbles endeavor to make washing up and de-germifying more fun, in hopes of reducing the nagging, whining, and battles that may otherwise drag out the process.

Usually T-Rex is all about shoving things into his mouth, but here in T-Rex Foam Dart Gun form he takes a turn at spewing them out. His resultant destruction and turmoil remain the same. Nice shot, T-Rex! You hit my mama's neighbor's fat cat, Willard, right in the keister!

The T-Rex toy gun comes with 26 standard foam darts that load into the dinosaur's mouth, cock with the twist of his tail, and then fire right back out with a pull of his leg. Ha! A pull of his leg! Who'da thought T-Rex would be a good sport about having his leg pulled?

The All-Terrain RC Batmobile is the latest toy in DC and Spin Master's Bat-Tech collection. It features performance tires that will trundle it over dirt and rocks, uphill and down, and even through snow and water. The 2.4GHz dual joystick controller drives the ATBatmoVile in any direction, and from up to 100' away. The RC toy is also designed to allow racing of up to 6 vehicles at one.

The Pool Punisher reminds us there are pool floats that mean pool floatin', and pool floats that mean pool business. And this inflatable tank with a built-in water cannon means pool business. The giant pool toy does a decent job of shaping and decorating itself like a military tank ready for battle, and an even better job of taking that battle to water with its "armor": a deep inset seat for a single rider; and a pump action squirt gun able to blast liquid ammo up to 50'.

I know these Mash'Ems Care Bears are for kids, but I can't look away from them. Every one of the six squishy surprise characters contained within the Mash'Ems Super Sphere just keeps...staring at me...

Made from solid brass and aluminum, the Super Precision Gyroscope is both the epic tinkerer's and workplace thumb-twiddler's essential toy. It runs on miniature stainless steel bearings that propel its movement continuously...

The dude in your office who always says to Ping me, brah! when that copy's done. When you're getting coffee? When it's time for Friday Feats of Strength in the conference room? Oh, it's time to ping him, brah!...

The next time you throw your hands to the sky and lament, "Argh! If only I had a doohickey with a flat lip on that end and a kind of hook-claw on the other that's small enough to fit in this slot here, and strong enough...

What I want to know is, if my friend Gary uses brute muscular force to bounce one helium-and-compressed-air-filled Skyball to its peak height of 75 feet, and my other friend Mitch drops a second Skyball from a balcony...

Sit 'n Spin + Wheels + Penchant for Collision (or Poor Dexterity & Depth Perception) = Kidzone Ride-On Spinning Bumper Car! Kiddos ages 1-1/2 and up, get ready for the ride - and the twirl! And the impact! - of your life...

If Tony Montana--or Al Pacino himself--ever wanted a Mini-Me, this would be it. In fact, looking at the photo closeup, it's hard to tell action figure Scarface is indeed only an action figure, he's so expertly designed...

People are freaking out for this animatronic Baby Yoda and its bobbing head and babbling sound effects as much as they are the real Baby Yoda. Er, the "real" Baby Yoda being a manmade puppet operated by master technicians...