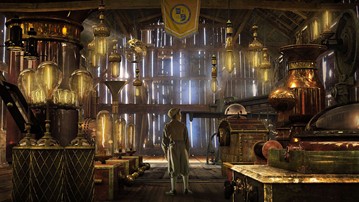 It's just what the plague doctor ordered: a curated collection of steampunk curiosities and designs. The 15 listings here sing odes to a mashup of times past, times yet to come, and a world we'll probably never see. But it's still fun to dream in eras Victorian and the Wild West meet a post-apocalyptic future meet macabre sci-fi fantasies.

Note: Steampunk gear prices are listed as they were at printing. Prices are subject to change.

If you were wondering whether or not post-apocalyptic society will be integrating text messaging with self-defense, the answer is yes. Thomas Willeford's steampunkified keyboard-arm guard combo, which he calls Dr. Gormsson’s Portable Babbage Interface, sports futuristic Victorian aesthetics and craftsmanship, full Bluetooth and type pad functionality, and comprehensive forearm protection from swords, clubs, and flyaway styluses.

The steampunk Nintendo controller coffee table isn't fully-functional like other versions of Charles Lushear's take on the iconic gaming system, but on the bright side, this means it is less likely to get broken during heated, fist-pounding sessions of Zelda and Mike Tyson's Punch-Out. Still equally likely to get broken when I tackle the tequila solo...or accidentally trip on the air while sober...and fall on its glass top though.

Casey Putsch calls his restored attack bike the Aristo-Cad. I think that's a great name. Very cool. Very fitting. And even if I thought otherwise I'd keep my fat mouth shut because this motorcycle also happens to be pimped out with fully functional* Browning .30 cal machine guns and ammo chains, plus a pair of brass-handled English fighting daggers mounted on the fuel cap. So say hello to the Aristo-cad...and its little friends.

And that's just the most obvious apocalyptical treatment Putsch has given his Aristo-Cad. Look closer and you'll also see a mounted WWI-era gun sight lifted from a Sopwith Camel biplane, and a chronometric tachometer reading off engine revs. Should the steampunk vigilante riding the bike wish to know when it's striking time, a hunter-cased pocket watch opens to reveal an early 20th century porcelain face from Tiffany & Co. Additional details include an English number plate, machine-turned mechanical oil pressure gauge, and hand-aged leather seat and tool bag.

*Well, they'll fire, but only blanks. Operation is via an on-board system of compressed oxygen and propane, controlled by computer through electronic solenoids, and ignited in a combustion chamber at the same cadence of actual fire.

Not for Sale ➠ Putsch Racing

You say you dig steampunk culture, but do you dig it enough to live it? Like, when you receive the invitation to your golden boy cousin Dickie's wedding with the "Black Tie" designation stamped across it, do you head to the closet and pull out a complete set of Victorian Steam Warrior leather armor?

Nixie analog watch faces and Nixie boring, flat digital displays. Readouts from cold cathode neon gas indicators are how I want to wear my time now. I've seen Nixie tubes turned into desktop clocks before, but this is the first I've seen some clever timelord turn them into a wristwatch. Nixie Horizonte is a shop based in Italy, and its owner, Igor Gudiy, hand makes each of these spectacles of a forgotten era from milled pieces of 7075 aluminum and brass, and a pair of real IN-16 Nixie tubes.

The Erasmus Darwin's Steam-Cerebrum Skull wishes all you Frobisher Brophys, Inquisitor Victor Lippetts, and Prof. Dr. Elias Claver, Esquires out there a Happy Neo-Victorian Taco Tuesday (note: at printing, it was Taco Tuesday)! A full 360 degrees of eye(socket)-catching steampunk detail and embellishments from the Bedlam Institute of Galvanic Studies in England make this dead little buddy come alive as a piece of desktop decor, or a trick-or-treating wingman. The skull even has a hidden drawer in his temporal bone for stashing the "herbal-infused" candies my favorite neighbors ever in unit 304 give out to the adults who come knocking.

Le Labo says, "Sure, Thomas Edison gave us light, but he didn't include a nebulizer to transform our Santal 26 fragrance oil into a fine mist to spread both light and perfume into your home." Which is crazy because I was just thinking that about Thomas Edison.

Gregory Besson molds resin into a majestic set of curled and undulating legs ready for mounting to any set of double doors. He brushes them with brass powder to finish, and set off their fetching 19th century industrial look. The Octopus Door Handles are part of a 100-piece limited edition, all signed by Besson.

Automaton clocks originate not from a love of steampunk or time, gears at work or the inner workings of machines - though one of those may be the reason you're drawn to them. Automaton roots are practical: one day, their creators, Wood & Rot, quit their jobs, bought a van, and started driving. Along the way, they found wood. So they picked it up and used it to make some lamps.

These modified USB flash drives are built with 80s-era pentode radio tubes from the then-USSR. The vacuum tubes are made with real copper and, here, house SanDisk USB flash drives. Data storage options range from 8GB to 64GB, and the USB supports 1.0, 1.1, and 2.0, and is compatible with the 3.0 interface. Use your industrial drive with WinXP, Vista, Windows 7, 8, and 10, Mac OS, Linux, Android, and smart TVs.

Morbid Curiosities: The Uncommon & the Bizarre

Craniometer for your coffee table? Morbid Curiosities: Collections of the Uncommon and the Bizarre caters to those fascinated by the macabre. By the occult. By death. And I'm not talking the cartoonish, whimsical, Beetlejuice kind of macabre and occult and death here. I'm talking straight up Hellraiser.

Yarr! I got me a wicked tharrst! Unleash the Kraken...water fountain. Sean M. Monaghan designed this octopus fountain, called Pearl Diver, for SPLASH! restaurant in the Santa Cruz Municipal Wharf. The double drinker is cast in bronze, and features fountains spewing from a smaller octopus at the bottom right of the shell basin, as well as a crab on the left. The pipes and shutoff valves leading to both, plus the submarine-looking plumbing system the kraken is wound around, add a big dose of steampunk to the "Lovecraftiness" of the water foundtain's 8-legged subject.

Monaghan completed the Pearl Diver octopus fountain in 2015. His website also features a few other sea-themed water fountains, as well as a giant octopus gumball machine, and additional bronze sculptures.

Standing 98" tall and weighing in at 990 pounds, this geared up swashbuckler is handmade entirely of recycled metal car, motorcycle, and machine parts. And modeled, naturally, after the most famous Captain ever named after a little birdie. This is a custom order, so if you've got the cash, I'm sure maker Kreat Works would be happy to weld you up a proportionately sized Black Pearl too.

This brass & copper lighter will bring some steampunk flair to any smoker's, incense burner's, or candle enthusiast's desktop. And if you're not into steampunk, no problem. The Doktor Bertram Blenkinsopp attributes of...