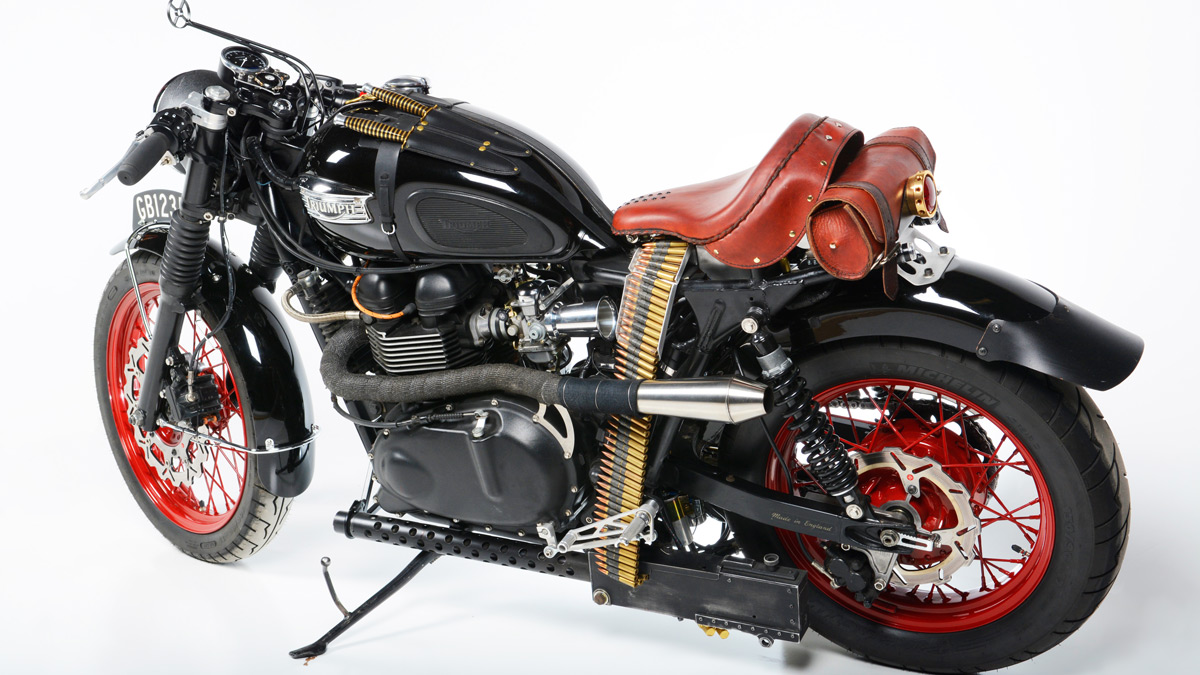 Putsch Racing calls their Steampunk attack bike the Aristo-cad. I think that's a great name. Very cool. Very fitting. And even if I thought otherwise I'd keep my fat mouth shut because this motorcycle also happens to be pimped out with fully functional* Browning .30 cal machine guns and ammo chains, plus a pair of brass-handled English fighting daggers mounted on the fuel cap. So say hello to the Aristo-cad...and its little friends.

And that's just the most obvious apocalyptical treatment Putsch has given its Aristo-cad. Look closer and you'll also see a mounted WWI-era gun sight lifted from a Sopwith Camel biplane, and a chronometric tachometer reading off engine revs. Should the steampunk vigilante riding the bike wish to know when it's striking time, a hunter-cased pocket watch opens to reveal an early 20th century porcelain face from Tiffany & Co. Additional details include an English number plate, machine-turned mechanical oil pressure gauge, and hand-aged leather seat and tool bag.

Functionally, the Aristo-cad incorporates a Triumph engine to remain street driveable (albeit questionably street-legal), and is tuned with a high mount racing exhaust and brass screen protected airflow though aluminum intake trumpets.

*Yep, use them if you feel obliged, though they'll fire only blanks. Operation is via an on-board system of compressed oxygen and propane, controlled by computer through electronic solenoids, and ignited in a combustion chamber at the same cadence of actual fire.

Putsch Racing is willing and ready to sell the Aristo-cad steampunk attack beast. Price is available upon application.

Despite Indian Motorcyle's best aesthetic efforts, the Indian eFTR Hooligan 1.2 e-Bike still looks more like a bicycle than a motorcycle, but hey. At least you don't need a license to ride one. You'll get a few other...