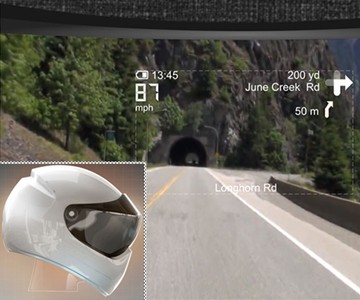 Though specifically in development for use on a motorcycle, I'd probably wear the LiveMap helmet while driving and walking as well. Its built-in navigation system and voice-controlled interface allow those rolling 'round the roads of our great Earth to reach their destinations without taking disruptive wrong turns through the Cincinnati ghetto or the entire city of Burien, WA, or compromising safety by continually looking away from the direction of travel at a GPS unit. Also, the LiveMap interface, with its guided turns and distance readouts, images of maps, and heads ups on the nearest gas station and KFC, may be the closest private citizens will get to owning a functional fighter jet--or Iron Man--helmet for the foreseeable future.

LiveMap helmet properties and capabilities about which to slap your grandma:

January 2014 Update: While LiveMap helmet funding was unsuccessful, thanks to private investors its creators still plan on producing and selling them to the public through the company's Website--follow the link below.