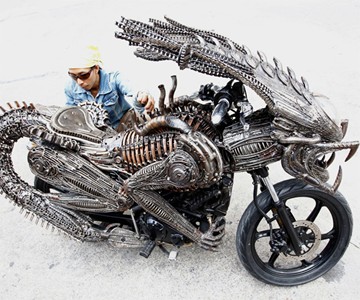 Alien prequel Prometheus doesn't hit theaters until June 1, 2012. So in the interim, let's take a trip down memory lane to the series' Alien vs. Predator installment. Are you there? OK, now throw in a motorcycle, a grip of recycled metal, and a superbly talented Thai sci-fi nut.

Metalworker and all-around artistic genius Roongrojna Sangwongprisarn has not only brought to life his wicked vision of an Alien-Predator amalgamation, he's done it 1) using old car and bicycle parts, and 2) on top of and integrated into a motorcycle still capable of roaring (or possibly creeping--it's unclear what the bike was in its former life) down the streets of Bangkok.

Sangwongprisarn operates 4 Ko Art Shop studios throughout Bangkok, from which he creates myriad fantastical beasts and beings. All of his work ascends from the rubble of decommissioned cars, motorcycles, and bicycles. Who'd have thought horror and intrigue could pair so well with recycling?