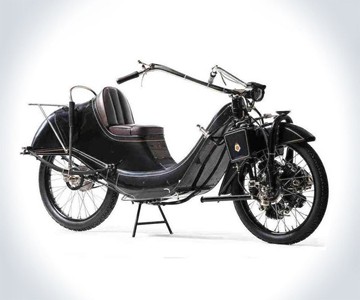 Sorry, dudes. You can no longer spend your kid's college / your retirement fund on a 1921 Megola 640cc Touring Motorcycle. Someone else already did. All $107,000 of it at Bonhams' recent auction of the extraordinarily rare German bike.

In addition to its part-steampunk, part-Grim-Reaper-driving-a-2-wheeled-hearse aesthetic, the Megola is an odd duck due to its 640cc, 5-cylinder radial engine built into the front wheel, and its starting method. To get the motorcycling motoring, a rider has to push it, or rotate its wheel with the bike on its stand. There is no clutch or gearbox, but the engine alone is torquey enough to propel it to a top speed of 70mph. A racing version of the motorcycle--which Bonhams points out did surprisingly well in competitions--could climb to 85mph.