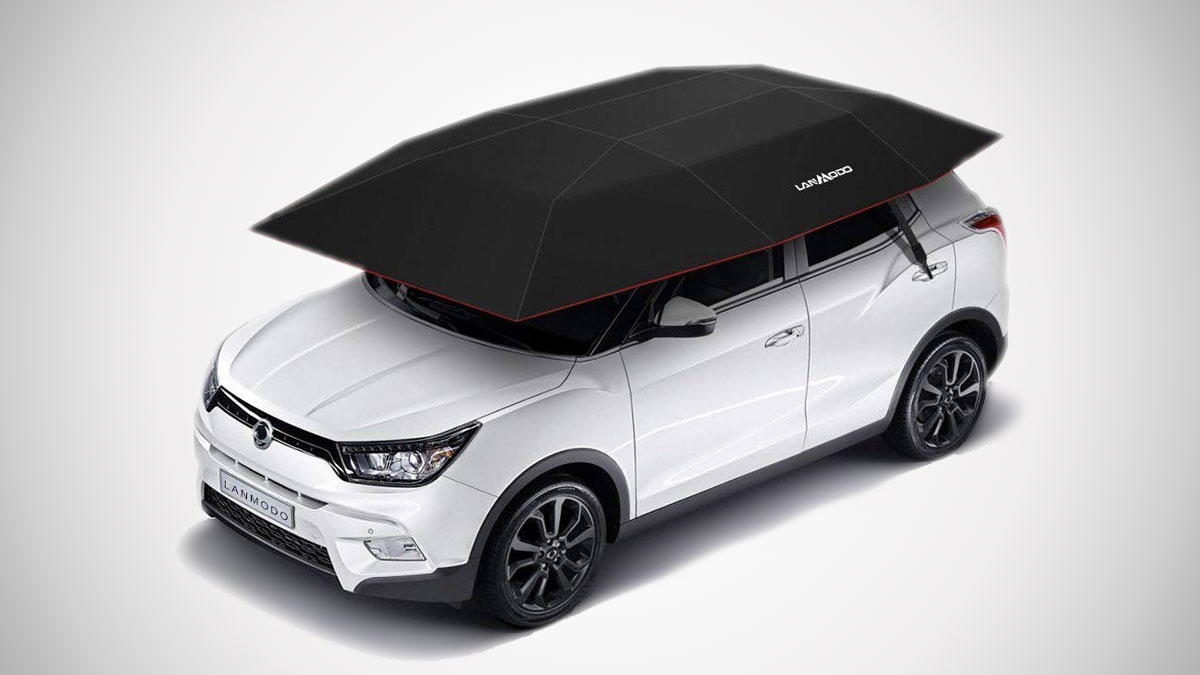 The Lanmodo car tent was designed to protect yours from anything the sky throws at it. Made of fiberglass and ready to spread its shielding wings in 8 seconds, Lanmodo is strong enough to ward off heavy rain, snow, wind, hail, and random falling objects, such as rocks and bird shit. Landmodo makers have actually thrown stones and bricks "from high places" to test out the tent's strength, and video evidence suggests it passed.

In the winter, Lanmodo can continue to function and keep snow and ice off your car in temperatures as low as -20 degrees F, and in the summer its whole-car-coverage could cool down interior temperatures up to 35 degrees.

The car tent's anti-theft system is twofold: 1) it can be operated only by remote control, so no one can manually fold it down to steal when open; 2) Lanmodo installs with an anti-theft rope embedded with steel wires that are difficult to cut.

Lanmodo car tents come in two sizes, and with or without a stand, the latter for use if you want to take your Lanmodo to the beach to serve as a portable automatic body tent.

Would it be too much of a conflict of interest to get a Star Wars sunshade featuring the Millennium Falcon crew for my windshield if I already have Darth Vader floor mats installed? I mean, on the one hand they're going...

Dude. I wish my mama had seen this wall-mounted patio umbrella before she bought a freestanding one with approximately 700 pieces and a base that needed to be filled with 250 pounds of sand. Because you know who put that...

You don't want to go glamping. I know that. But she probably does. In fact, the offer of sleeping in a tent roomy enough for 2 Queen beds (or 8 children, enthusiastic procreators!) and a stove with chimney pipe might...

My mama wanted me to get her a cedar pergola for her patio this Mother's Day, but holy crap! Cedar pergolas are expensive! And I'm not just talking custom built pergolas, but even pergola kits, the latter of which are...

A KAVU Chillba Hat, some KEEN UNEEK Sandals, and an unwavering commitment to bringing the whole team--even the kids who just stand around at midfield and barely break a sweat--orange slices for after their soccer games...