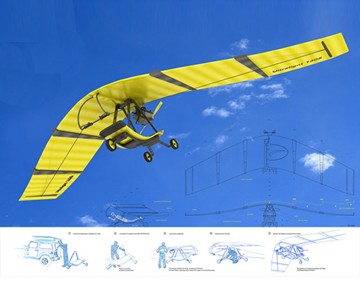 Impressively, Russian industrial designer Ekaterina Dekhtyarenko went from creating a stylized egg holder to conceptualizing and rendering a complete manned vehicle of flight (OK, she did do a hang-glider along the way as well.) Her Patrol Ultralight Aircraft recently debuted on artists' portfolio presentation site Behance, with the intent of serving as a compact, easily-assembled, and simple-to-use tool for fire-prevention patrol, patrol of reserve zones, and search and rescue missions.

Land preservation, upholding the law, and personal protection. Huh. See I was thinking more along the lines of aerial drag racing.

The Patrol Aircraft would be fashioned using eco-friendly materials, and encourage economic flight. Its long overhead wing, a system of blocks-over-framework, is specked as synthetic fiber, with blocks joined "by means of special connections" (mysterious!) The idea is for the modular blocks to disassemble easily for transport in the trunk or on the roof of a car or truck.

Fastened to the monolithic wing would be a management wheel, motor, and suspension brackets, along with elevon control units at the wing's edges for aircraft maneuvering. Pilot seating is an ergonomic, carbon fiber design.

Patrol speeds, controlled either by an electric or gas-powered engine, are intended to range from 19 to 56 mph, with top flight altitudes of 13,000+ feet.

First they fly, then they're flayed! PlaneTags are collectibles hand cut, stamped, and shaped from the skins of retired aircraft. The ID-style tags are a new - and far more affordable - line from MotoArt, the California-based...

Japanese design and engineering firm Phiaro has shown up to various motor and trade shows with some pretty sick rides, but the Buzz Helicopter concept (or maybe prototype? Information is sparse) has got to be the most...

As if a Hoverbike Part I weren't mind-blowing enough, Manhattan Beach aerospace engineering firm Aerofex is tossing its own aerial ATV prototype into the pool of flying bikes most recently filled by Australian fabricator...

Fighter Pilot for a Day

No matter how deep Tom Cruise sinks into Scientological insanity, or how pudgy and disconnected from reality Val Kilmer becomes, will there ever be a red blooded American male who wouldn't put a full nelson on the chance...