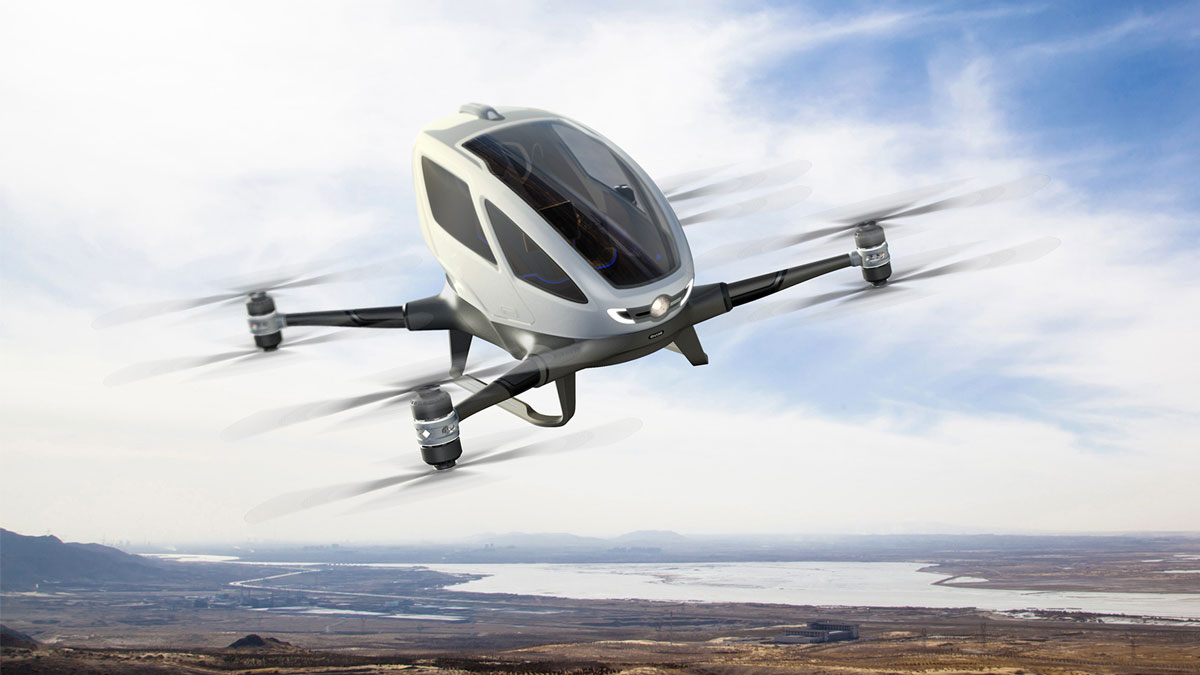 EHang cut its teeth on drone manufacturing a couple years ago with the GHOSTDRONE, a quadcopter they dub "smart" and "the easiest drone to fly in the world." But now it's 2016. Smart and easy to fly are standards. EHang needed something bigger and better to impress audiences at this year's Consumer Electronics Show (CES) in Vegas. Something that could compete with Parrot and DJI. No, even bigger and better than that. Something that could compete with Toyota and GM. EHang decided to go from smart, smartphone-controlled, cinch-to-pilot drone to a full-on Autonomous Aerial Vehicle (AAV). The EHang 184 AAV is a life-size drone. A drone with a cockpit for a human passenger. A drone that flies itself.

EHang says it created the 184 with the goal of "providing Medium-Short Distance communication and transportation solution[s]." The giant quadcopter's main structure is built from composite material, carbon fiber, and epoxy, plus additional areas of aluminum alloy. It has 8 propellers, 1 on the top and bottom of each arm. It is 100% electric.

The 184 AAV was designed as an autonomous commuter. A self-driving car that doesn't have to contend with traffic. Or any infrastructure whatsoever. EHang, which debuted a working prototype at CES, says the drone can carry a single person weighing up to 260 pounds anywhere within a 10-mile or 23-minute flight time vicinity. Without pilot input. Without crashing. The drone is supposedly designed such that it will operate a safe and normal flight plan even if one portion of its power system is functioning abnormally. And if multiple components malfunction or disconnect, it is programmed to land immediately in the nearest place possible. We'll see.

184 AAV "pilots" operate controls only to take off, pause flight, and land the craft. They also use an app to tap in where they want to fly. The "smart" system takes care of everything else. We'll see.

Drone interior features include air conditioning, a 4G data connection, and a small storage compartment for a briefcase or an SOS parachute.