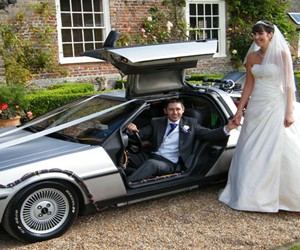 Time Machine Rental.com will neither confirm nor deny the functionality of their DeLorean's flux capacitor, but they do make mention of animated interior interfaces and buttons and switches that light up like a Christmas tree on the 4th of July, so I'm taking that to mean yes. Yes, the flux capacitor fluxes and this Back to the Future rental is primed and ready to travel from your trade show, sci-fi convention, or wedding to 1885, 1955, 1985, or...ugh...October 21, 2015. It makes me very uncomfortable to think that far off time depicted in Back to the Future II sits a mere 2-1/2 years from today. I almost don't even need to rent a DeLorean to get there. I could probably walk.

Time Machine Rental.com's hand-altered DeLorean is a street legal replica of the one Marty McFly and Doc Brown tooled through history in in the film. It splits its time between Minneapolis, Minnesota and Las Vegas, Nevada, but will gladly venture outside of those cities to accommodate requests. However, the $1,500 fee is a daily base rate, and an additional $1 will be charged per mile of travel. On the upshot, the company donates a portion of every rental to Team Fox on behalf of Michael J. Fox’s Parkinson’s Research Foundation.